Numismatics: an Esperanto cultural treasure trove no longer in the dark (1) 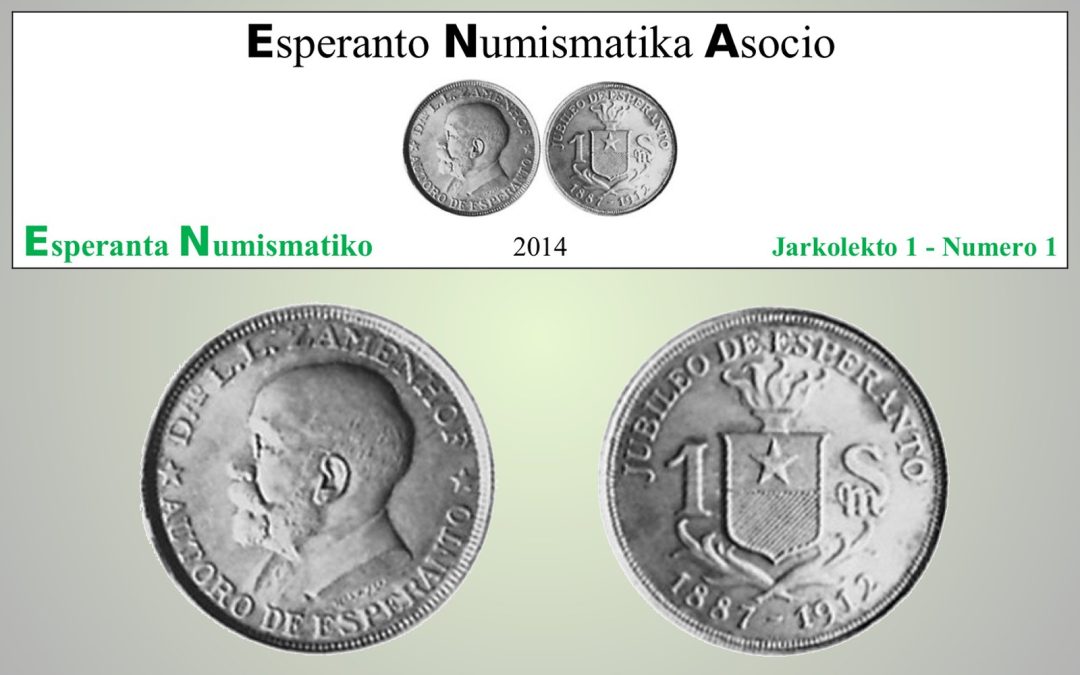 While ESF Connected lets us shine a spotlight on this infrequently seen topic, we must advise readers that the following presentation of the role of Esperanto numismatics in the culture of Esperanto can offer only a concise and partial picture. Nevertheless, we will point out an easy way for readers to satisfy their curiosity and complete their knowledge of this phenomenon through a free subscription to a relatively new specialist group with its own journal Esperanta Numismatiko (“Esperanto Numismatics”).

Does Esperanto really have its own culture?

“Esperanto culture” is another way of saying the culture that arose and is still growing, enriching itself, in the furrow ploughed by the cultural language of a worldwide diasporic community. This is how a unique culture came into being, simultaneously transcultural and intercultural – e.g. via translated literature on the one hand, original literature on the other. Esperanto culture is a stepping stone to other cultures. Our international culture encompasses not just symbols, but community customs, diverse ideologies, etc. This is how Esperantists support their identity, the coat of arms of their very own culture. Recommended in this connection is the Gvidlibro tra Esperantio “Guidebook through the Esperanto world”, a dictionary of culture for Esperantists.

The desire to collect things is a primal aspect of human cultural experience, psychologically and socially, and of course the pioneers and their followers started collecting magazines, journals and books in which the language itself took centre stage. After that came other objects, such as postage stamps, stickers, posters, etc. And this is where, among other things, the concept of a ZEO comes from, an acronym for “Zamenhof/Esperanto-Object”. Such “monuments” around the world were catalogued by Hugo Röllinger in Monuments to Esperanto: Illustrated documentation of 1044 Zamenhof/Esperanto-Objects in 54 countries. This is just one of the cultural experiences available through Esperanto.

So, from 1887 onwards the set of people collecting Esperanto items doubtless kept growing and differentiating themselves. A look through magazines and journals of that time shows that the number of stamp collectors grew spontaneously and the first philatelic catalogues soon appeared. Collectors of other objects, as well as those collecting reading material, only occasionally found their interests addressed by short columns in general or specialist journals. Coin collectors were sadly among them. A fairly comprehensive exploration of the collections of various libraries indicates that between 1887 and now, no catalogue or terminological glossary of Esperanto numismatics was ever published. Why not? Were the quantities and qualities of coins or medallions too insignificant, too trivial, for any aspiring numismatist or numismatological Esperantist to collect and describe them? Certainly not, but the reason(s) should one day be the subject of serious scientific research.

However, a private collection, amassed over approximately two decades, suggests that this collection may only be the tip of an uncharted iceberg, as yet invisible. An encounter during an Esperanto New Year celebration in Germany (the International Festival or IF) with Hans Jankowski, an unassuming coin collector and specialist, revealed that this self-taught expert in Esperanto numismatics had published three booklets containing the indispensable results of research barely known until then. These booklets became the basis for the foundation in 2014 of the first specialist group on Esperanto numismatics in the history of our movement, serving as a launchpad for a project with three goals to fill one of Esperanto’s hitherto almost unoccupied cultural niches:

In the next two parts of this series, we will reveal first the role played by pioneers like De Saussure, Cseh and others in trying to create an international monetary unit under the slogan “One world, one language, one currency”, and then how medallions (often magnificent ones) by distinguished sculptors illuminate and illustrate the most important people and events in the history of our movement.

Bert Boon is a Belgian Esperantist, founder of the Esperanto Numismatic Association, UEA’s first specialist group on numismatics, and editor of its journal Esperanta Numismatiko. The journal and membership of the association are free.
Ĉi tiu artikolo estas ankaŭ disponebla en Esperanto.