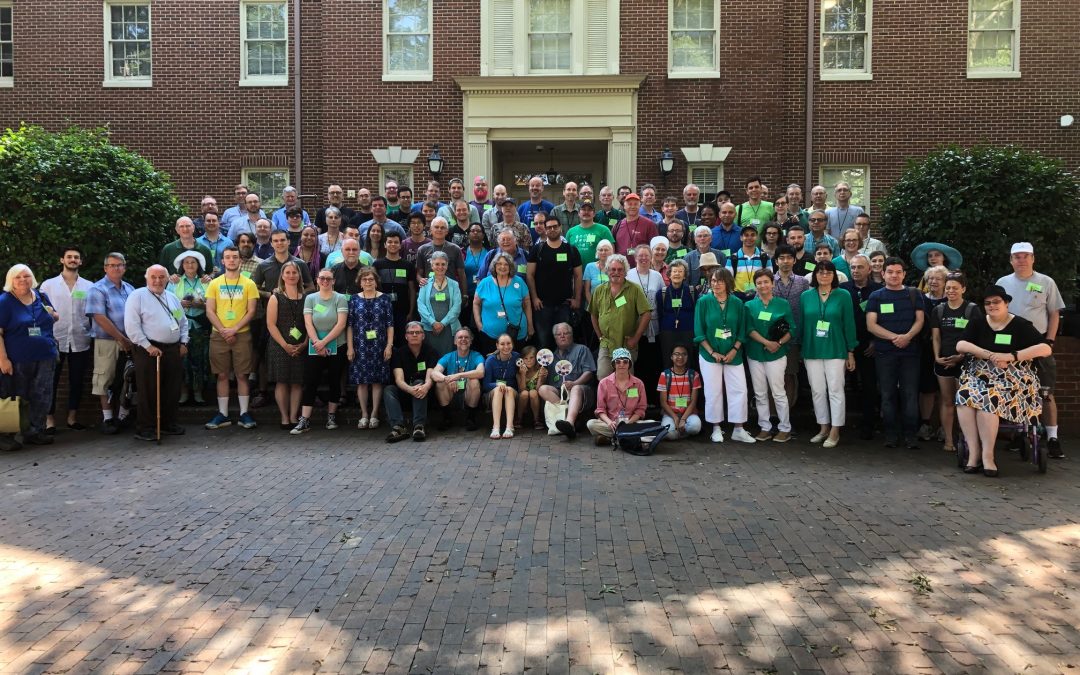 NASK (North American Summer Courses) was born in California in the 1970s after Catherine (“Cathy”) L. Schulze and her husband William (“Bill”) H. Schulze took part in an Esperanto course at North Adams State College, in Massachusetts, in 1969, led by Professor Duncan Charters. Cathy and Bill had the idea to establish an advanced level, official program for teaching Esperanto at San Francisco State University, with two main goals: the training of teachers, and the improvement of the language level of American Esperantists. After a long period of negotiation and persuasion with the SFSU regents, the courses began in 1970 with the famous writer William Auld and the aid of Duncan Charters, two levels of instruction and 52 students.

For comparison, in the courses in 2000, the last year of instruction at SFSU, 66 students participated at four levels with three instructors. During the 31 years of the series, different instructors created special method classes for teachers.

Cathy Schulze received high praise for the instigation and continuance of the courses, even from the then mayor of San Francisco, Frank Jordan. He signed an official proclamation in 1994, praising the long strides of Cathy toward those goals, with a mention that the courses contributed greatly to education, in general, as a model of high quality foreign language teaching. Then Mayor Jordan named the 27th of July, 1994, the “Day of International Friendship in San Francisco.”

Before her death in 1999, Cathy began to train Ellen M. Eddy to take over the role of administrator of NASK. Ellen often participated in NASK starting in 1981 and lived in the San Francisco area in the 90s.

Everything progressed smoothly until 2000 when, because of a change in the university calendar, the dormitories at SFSU were no longer available for the summer courses. After that, the courses wandered to different locales. First to the University of San Francisco, and later to the School for International Training-SIT in Brattleboro, Vermont. After five years there, the courses returned to the west coast of America to the University of California-San Diego (2007-2012).

The program suddenly changed again in 2020 because of the Covid 19 pandemic. In that year, with the help of the internet “Zoom” system, two sessions occurred. The first had five courses: two post-basic, two middle level, and one advanced. In all, 156 students participated. Another session occurred in the fall with two levels. The present plans for 2021 are for a spring course for those who need more help to reach the post-basic level and later, three levels during the regular summer period. We hope to return to WPU in 2022.

The internet courses only somewhat substitute for the in-person experience. NASK provides a truly international experience. One lives, eats, and lives with students and teachers from every part of the world. In the evenings and on weekends, entertaining and educational affairs take place, including presentations, singing, dancing, conversation circles, picnics, and excursions in the neighborhood. An important part of these classes every year is the friendship and inspiration which enriches the lives of the participants.

Before her death, Cathy willed a large sum of money to the Esperantic Studies Foundation (ESF) to guarantee the future of NASK. Two educational foundations at Esperanto-USA give financial help to deserving students.

For more information, visit the NASK website. There are photos of participants, a list of instructors, a short history of NASK, information about upcoming classes, examples of the daily newsletter, the NASKa Fasko, and a handbook of helpful information about the locale.

Ellen M. Eddy taught school at the elementary level and after many years of participation in the Esperanto courses at San Francisco State University she became the administrator of NASK in 1998.
Ĉi tiu artikolo estas ankaŭ disponebla en Esperanto.