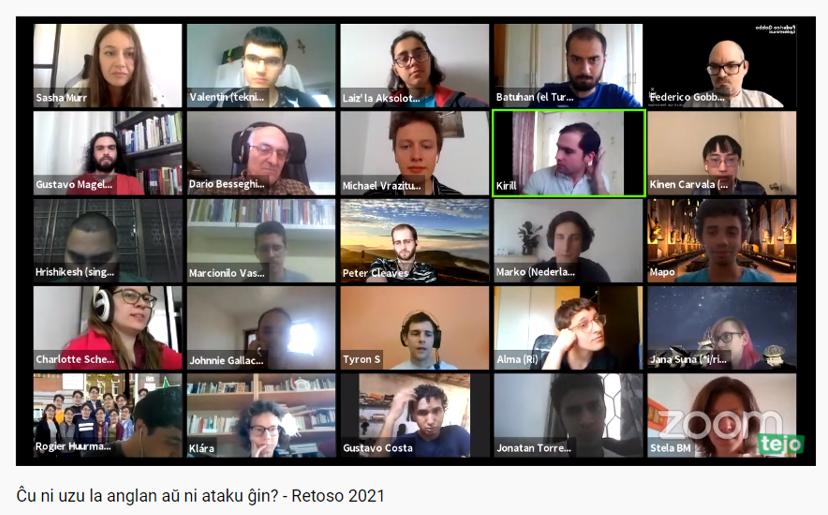 My name is Tyron. I am a British student now living in the United States, but most important for this blog, I was a member of the organizing team of Retoso – the new online event of TEJO (Tutmonda Esperantista Junularo / World Esperanto Youth). Our team had 7 members from 7 countries (covering 4 continents) and successfully organized Retoso – the event occurring from the 2nd to the 5th of April 2021, with 70 hours of programming and 200 participants from 45 countries.

TEJO was founded in 1938, and represents all young speakers of Esperanto. One of its key activities since it was founded was the organising of the “International Youth Congress”, scheduled last year to occur for the 76th time, in the Netherlands. However, due to the COVID-19 pandemic, it had to be moved online, and against all expectations it was a great success! It was no replacement for an in-person event, but it did have specific advantages, such as being far more accessible for an international movement like Esperanto – the top 3 countries being Germany, Brazil, and the United States, each in a different continent. A group of us in TEJO saw this, and thought it would be a shame if online Esperanto events, and their advantages, were forgotten once the pandemic was over. From that, Retoso was born.

The name Retoso comes from the Esperanto words reto (internet/online), and etoso (atmosphere), and that gives a good impression of what we were trying to achieve with the event. We had a very diverse programme. To give some examples, my personal favourites were the “Should we use English or attack it?” debate, the lecture “Esperanto: a minority language?”, the “American Gufujo” nighttime chat room, the (fully in Esperanto) concert by Tim Gallego, the ecumenical Easter service, and the “Culture Hour” talent show. In addition, the event IRIS (International Online Interdisciplinary Symposium) ran parallel to our programme, with 7 high quality academic panel discussions, on a wide variety of themes. 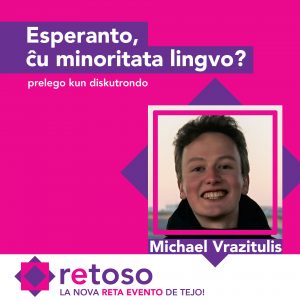 We are very grateful for the support ESF gave to us. Given this is a brand-new event, we had no obvious financial model to follow, and were very concerned that Retoso wouldn’t be financially sustainable. To that end, we requested a one-off grant from ESF. This was thankfully given, and really helped us. On the one hand, it financially underpinned the event, and allowed us to take risky decisions we otherwise might not have done – such as allowing TEJO members to attend for free. This was definitely the right decision, giving Retoso a critical mass of attendees which allowed for such a bountiful programme, and we wouldn’t have been able to do it without the support of ESF. But even greater than this, it liberated our organizing team from having to constantly worry about finances, and allowed us to focus our energies on actually organizing the event.

One part of our vision from the start was that this wouldn’t be just a one-off event. We wanted to start a tradition of TEJO hosting online events, as a permanent supplement to those it organizes in-person. It is too early to see whether this vision will come to fruition. We originally planned to organize Retoso twice a year – during Easter, and then around Halloween – but the cancellation and (again) moving online of the IJK has affected these plans. However, there are some positive indications. Our team had to work very hard, to do things like write up the contracts, make the website, come up with the idea for the event, invent a name, establish all internal working procedures etc. Future organizing teams won’t have to repeat that work, so the entry cost to organizing it again is much lower. And even if the moving online of the IJK affects our original plans for Retoso, it does show that online events are now a permanent feature of the Esperantist landscape, and that’s only a positive sign.

Tyron is from the UK and is currently doing his MA at the University of Missouri in the United States. He learned Esperanto in 2015, and is now very active in the movement, being a committee member of TEJO, organizer of Retoso; he often writes and lectures about Esperanto history.