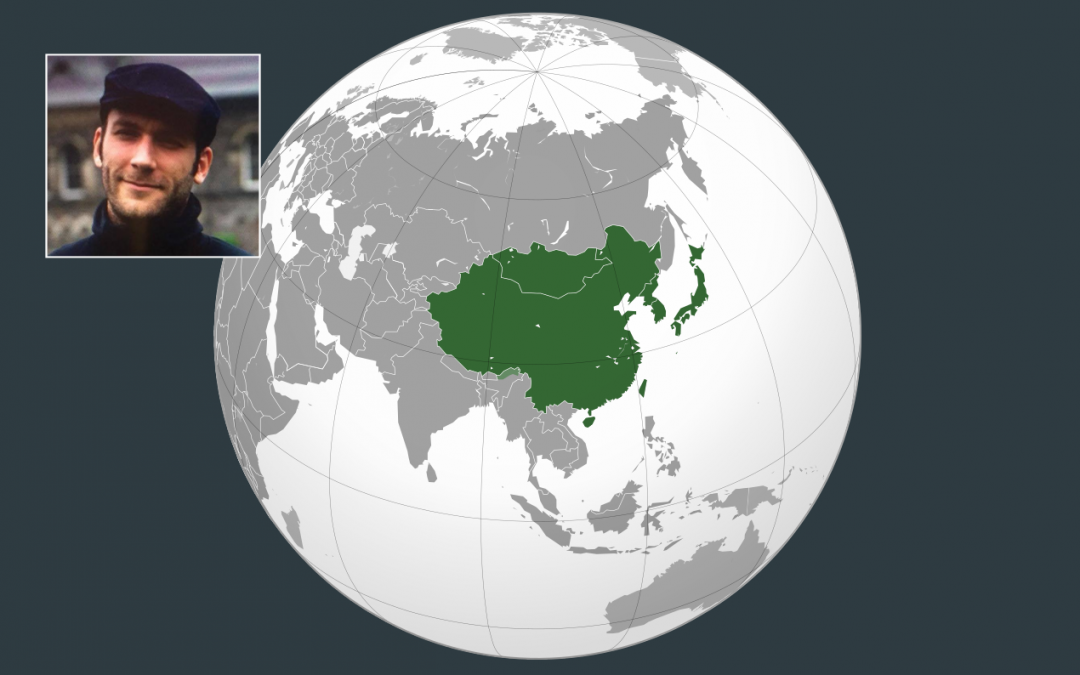 Born in Gouda in the Netherlands, I had a strong interest in foreign languages from an early age. I had the opportunity to learn several modern and classical languages in school. Upon graduation, I decided to expand my interest by choosing to study Japanese in university. I received my BA and MA in Japanese Studies from Leiden University and my PhD in East Asian Studies from the University of Toronto in 2021.

During my doctoral research, I discovered Esperanto through Konishi Sho’s book Anarchist Modernity: Cooperatism and Japanese-Russian Intellectual Relations in Modern Japan (2013). For my research on Esperanto, I visited the Esperanto Museum in Zaozhuang, China, observed Esperanto classes by the Seula Esperanto-Kulturcentro in Seoul, Korea, and frequently used the Esperanto library of the Japana Esperanto-Instituto in Tokyo, Japan.

My research on Esperanto is part of my dissertation “Assembling Solidarity: Proletarian Arts and Internationalism in East Asia”, which examines a literary and cultural history of proletarian arts across East Asia during the 1920s and 1930s and their investment in international solidarity. I am currently a course instructor at the University of Toronto, where I teach courses on East Asian literature and history.

With the help of a Marjorie Boulton Fellowship from ESF, I have been able to continue my research on Esperanto after graduation.

In 2021, I presented my research on Esperanto at three international conferences. In May, I participated in the panel “Rethinking Minor Literature: Collectivity and Class in New Political and Linguistic Contexts” for the virtual conference World Literature and the Minor: Figuration, Circulation, Translation organised by KU Leuven in Belgium.

My presentation, entitled “Minorising the Imperial Language: Proletarian World Literature and Esperanto in East Asia”, examined Esperantist Hasegawa Teru’s (1912–1947) essay “Esperante aŭ nacilingve?” (Writing in Esperanto or Writing in the National Language?, 1935). In the essay, Hasegawa discussed two interrelated problems: in what language should an Esperantist write (Esperanto or their national language) and why should an Esperantist write for a national audience? Hasegawa’s essay illustrates the worldwide effort in creating a non-hierarchical world literature by and for the proletariat during the first half of the twentieth century. As such, how does writing literature in an artificial language like Esperanto, without [many] native speakers and a nation-state, complicate Deleuze and Guattari’s understanding of minor language and literature? What can Esperanto literature tell us about the possibilities of creating a world literature beyond linguistic and ethno-national borders? My presentation explored these questions and elucidated the possibilities of a proletarian world literature in Esperanto by reading through the works of Esperanto writers Hong Hyŏng-ui (1911–1968), Hasegawa Teru and Ye Junjian (1914–1991).

In August, I was part of a panel for the largest conference in Japanese Studies in Europe, the 16th International Conference of the European Association of Japanese Studies. My paper discussed how Esperanto could accommodate a linguistic space for proletarian voices, both in speaking and writing, to traverse the human community in a fixed geographical location and to connect with foreign peers for international exchange. My focus was on Esperanto correspondence groups affiliated with proletarian cultural movements, Esperanto teaching by proletarian writers, and international letter writing in Esperanto.

Through an examination of the extant Esperanto letters written by proletarian language learners and the distribution networks in imperial Japan, I analysed how proletarian struggles were voiced in letters by colonial subjects, prisoners and farmers. My study aimed to reveal how Esperanto undermined the dominant structures of linguistic power in the Japanese empire and formed aggregates of linguistic solidarity by empowering proletarians to actively participate in exercising international solidarity and connecting local struggles to the worldwide proletariat.

The third presentation was for the largest conference in Korean Studies in Europe, the 30th Association for Korean Studies in Europe (AKSE) Conference organised by La Rochelle Université in France in October 2021. In my presentation, “Resisting the Imperial Tongue: Esperanto in Colonial Korea”, I started from the article “The Korean King and Esperanto” published in the journal The Japanese Esperantist in 1906, reporting that a Japanese Esperantist visited the royal palace to inform King Gojŏng about Esperanto. According to the article, King Gojŏng showed great interest in the artificial language and even studied the language himself, most likely with the first comprehensive textbook of Esperanto published in East Asia by the Japanese writer Futabatei Shimei.

While it is difficult to verify this anecdote, it illustrates the significant yet mostly forgotten role Esperanto played in the formation of the linguistic and literary modernity of colonial Korea. As such, how did writing in Esperanto contribute to the development of modern Korean? What can the history of Esperanto in colonial Korea tell us about transnational exchange across East Asia?

Addressing such questions, I examined the history of Esperanto by connecting the extant fragments of historical sources and creating the first comprehensive history of Esperanto in colonial Korea in English. Central to this paper are poet Kim Ŏk (1896–unknown), writer Hong Hyŏng-ui (1911–1968) and translator and journal editor An U-saeng (1907–1991). Examining Kim, Hong and An’s Esperanto writings as well as their intimate exchange with other East Asian Esperantists, I tried to elucidate the transnational history of Korean Esperantists and its impacts in the fields of literature, translation and linguistics.

In August, I was invited by Dr Mark McConaghy, an assistant professor in modern Chinese literature at the National Sun Yat-Sen University in Taiwan, to participate in an international symposium organised by the Global Sinology Forum there, which aims to be an analogue and digital space for sinologists from around the world to collaborate, cooperate and learn from one another.

The symposium was on noted Taiwanese intellectual Yang Rubin’s newest monograph, entitled Thinking the Republic of China. I was asked to discuss Chapter 2 from the book, in which Yang examines the rise of revolutionary cultural production during the Republican period (1911–1949) and its impact for thinking community, self and history throughout the 20th century in China. After my discussion of the chapter, I extended my talk by connecting it to the transnational history of Esperanto in East Asia with a focus on Taiwanese Esperantists to complicate national histories of revolutionary culture.

In the fall and winter of 2021, I also had the opportunity to complete the draft of my journal article on Esperanto in colonial Korea. Building on sections from my doctoral dissertation and rewriting my aforementioned AKSE presentation on Esperanto in colonial Korea, I discuss the Esperantists Kim Ŏk, Hong Hyŏng-ui and An U-saeng as an attempt to make this unknown history available in English for the first time. For this paper, I acquired additional Esperanto sources, such as Verkaro de Hengwi Hong (1969), Kolekto de materialoj pri la Esperanto-movado en Koreio, Vol. 1 (1976) and Sistema Kurso Gramatika de la Lingvo “Esperanto” de Verda E. Kim (1923 [2008]). I am currently making the final revisions and preparing the paper for submission to an academic journal.

2021 was also a year that I was blessed to make the acquaintance of Esperantists and Esperanto scholars. In the summer, I was contacted by Yauheniya Hudziyeva, an Esperantist from Belarus and a PhD student in Japanese anarchist poetry at Waseda University in Japan. She is part of a larger Esperanto network in Japan and helps me to connect with Esperantists in Japan. In the near future, she will help me with organising the international symposium on Esperanto in East Asia and creating an online database for Esperanto materials. Further, I have been in contact with Ulrich Lins, Esther Schor and Konishi Sho. Esperantist Myrtis Smith reached out to me to present my profile on ESF social media channels.

Lastly, I am involved in a collaborative research project with Dr Derek Kramer, a postdoctoral scholar at the University of Wisconsin–Madison. For this project, we are currently preparing an academic article, tentatively titled “Speaking for Science: Dreams of an Esperanto Infrastructure in Colonial Korea-Japan”, that takes up the topic of transnational language as infrastructure to highlight how the Esperanto movements of the Japanese Empire tapped into powerful assumptions about the universality of knowledge, utilitarianism’s intrinsic prerogative and the menace of exclusion from history’s advance.

For the coming year, I have planned another four conferences. In March, my organised panel “Seeking a Universal Tongue: Esperanto and Politics in East Asia” will take place at the 2022 Annual Conference hosted by the Association for Asian Studies in Hawaii. The largest Asian Studies conference, gathering over 3000 members, will allow me to showcase my research on Esperanto to a broad audience. I will be joined by Joshua Fogel (York University), Kamimura Kazumi (Josai University) and Yauheniya Hudziyeva (Waseda University).

Our panel focuses on the cultural and political history of Esperanto from its arrival in East Asia up until the end of the war in 1945, examining the transnational trajectories of intra-East Asian exchange among Esperantists. Each paper analyses how Esperanto was utilised for political means and spurred transnational exchange among anarchist and proletarian movements as well as anti-colonial and anti-fascist activism.

Joshua Fogel starts the panel with a detailed examination of Esperanto’s introduction to East Asia through anarchist channels, addressing the limits of Esperanto’s initial aspirations and its repurposing for local concerns surrounding language reforms. Yauheniya Hudziyeva continues the discussion by examining Esperantists Yamauchi Koshizu and Lian Wenqing and their anti-colonial activism in Taiwan. Kamimura Kazumi explores how Esperanto was turned into a political and artistic weapon within the proletarian movement in interwar Japan. Finally, I examine how Esperanto became essential for the anti-fascist united front during the Sino-Japanese War, discussing the work of An U-Saeng and his Esperanto activities in Southern China.

The other three presentations are still awaiting acceptance. In June, I hope to attend the online conference organised by the American Comparative Literature Association in Taiwan. In my presentation “Proletarian Solidarity, Esperanto and Disembodied Voices in East Asia”, I examine different manifestations of voice found in the cultural production in Esperanto by proletarian movements in East Asia.

In July, I plan to present a paper at the North American Taiwan Studies Association’s annual conference in Washington. This paper examines the history of the international auxiliary language Esperanto in colonial Taiwan with a specific focus on Esperantist and social activist Lian Wenqing (Liân Un-kheng, 1894–1957).

Lastly, also in July, I will present a paper titled “Translating the Proletariat in Esperanto: Nakagaki Kojirō, (Inter)national Literature and (Un)translatability” at the International Comparative Literature Association’s congress held in Tbilisi, Georgia. In this presentation, I discuss Nakagaki Kojirō’s (1894–1977) Esperanto Translation Laboratory (1934) to examine translation theories set forth by proletarian Esperantists in relation to the production of a world literature in Esperanto.

In addition to conferences, I aim to start planning the international symposium on Esperanto in East Asia tentatively scheduled for summer 2023. In July 2022, I will start my new position as Assistant Professor at the University of Hong Kong (HKU). I plan to explore the possibility of hosting the symposium at HKU. I will also start on an open-access Esperanto database with digitised Esperanto books and journals and so on. I will begin by preparing a website and scanning Esperanto journals from pre-war Japan. Finally, I strive to continue expanding my network with Esperantists in East Asia, such as Miyazawa Naoto and Hori Yasuo.