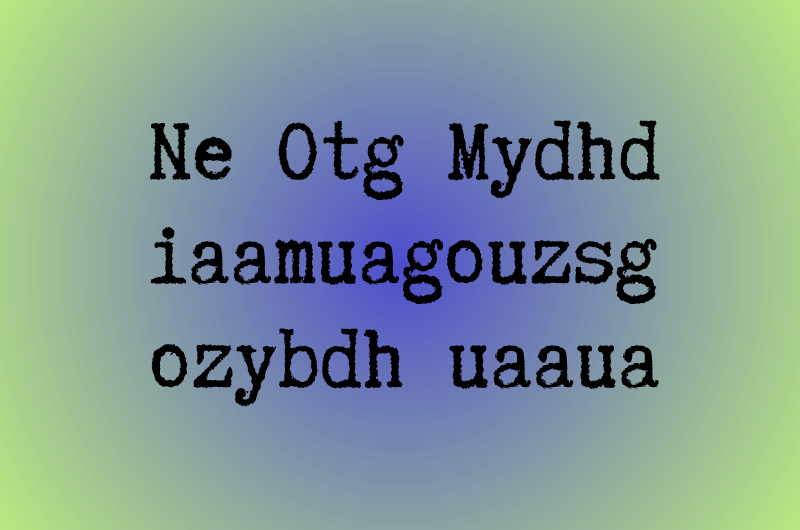 You may recall that a few instalments back, I outlined a fascinating artistic language called Elet Anta that has been all but forgotten since the death of its author. Now I’d like to present another similar curiosity, whose designer – under the pseudonym Galivad – says: “A lot of work went into creating this language, and I’d just like to share it, rather than leave it gathering dust in some old notebooks.”

This is the language Otg, pronounced roughly “Otch”, but more about that in a minute. It has a massive dictionary of over 16,000 words, so one can certainly believe that its creation involved long effort.

The dictionary is archived at the Wayback Machine, along with a presentation of the grammar. These documents date from around the turn of the millennium, and like many early websites their layout is a chaotic mess. But if you can look past that – or do as I did a few years ago and spend a rainy weekend tidying them up into something easier to peruse! – they turn out to be very interesting.

(To be fair, I should add that Galivad started working on Otg in the 1960s “during a time in my life when I had nothing better to do”, so it’s perhaps unreasonable to expect modern standards of computer literacy in the presentation.)

But on to the language itself.

It uses the Latin alphabet with no accented letters, in a regular but peculiar orthography that is slightly reminiscent of the Celtic languages. The sequence tg represents a palatalised t, a sound that’s spelled ti when it appears before a vowel, so gotia “to search through, rummage” sounds a bit like the English word gotcha. Similarly sg (si before a vowel) sounds like English sh, tzsg (tzsi) like English ch and dzsg (dzsi) like English j.

Note that Otg and otzsg “saliva” are not pronounced the same. The latter is really the one that sounds like “Otch”.

Each of the five basic vowels has both a long and a short variety, in a regular pattern: they’re short only before a voiceless consonant, so oc [pron. ok] “house” and og “big” have a short and long o respectively. The long vowel written a has shifted over time to end up as an open type of o sound, similar to aw in British English law. The letters i and u are semivowels, pronounced like y and w in English; the ee and oo vowel sounds that one often associates with the letters i and u are instead spelled y and ou: thus uyf “fish” carries a certain whiff.

There are also eight diphthongs (e.g. ai, pronounced like English oy), along with several fiendish sequences of vowel letters that actually represent single sounds, such as aiu (like German ö) and eiu (like ü).

This spelling system yields plenty of words that appear almost completely unpronounceable to the uninitiated:

A key element of Otg grammar is that inflectional endings often use vowel harmony. This means that when a grammatical ending is added to a given word, the vowel of the ending has to conform to the vowel of the stem of that word. In some cases, it has to contrast instead.

It’s the same with the dual ending -b, which is used when talking about obvious pairs of items or a vague “couple” of things:

For a conforming example, we can glance at the verb system. The infinitive ends in -a (as in gotia, mentioned above). The endings for the singular are: -l (I …), -m (you …) and zero (he, she, it …). If we add these endings with a conforming vowel, we get the present tense:

But the selfsame endings with a contrastive vowel create the past tense:

If you combine both in that order, you obtain the imperfect:

Vowel harmony is a common feature of agglutinative languages such as Turkish and Korean, and Otg is highly agglutinative, too. It builds words by stringing together unchanging elements, much as Esperanto does. For instance, iaamuagouzsg [approx. yem-wawg-oozh] “orange juice” consists of iaamuag “orange (fruit)” and ouzsg “sap, juice” – and iaamuag, in turn, is the colour iaam “orange” plus uag “apple”.

There are also at least 50 suffixes available, including -ai for a place (rather like -ej- in Esperanto):

and ytht for a science:

While the language no longer has any productive prefixes for forming new words, it does have a couple of dozen “frozen prefixes”. The meanings of these are partially or wholly opaque, but they appear throughout the vocabulary, where they effectively serve to group words into semantic families.

The ultimate roots are usually composed of just a vowel and a consonant, such as eb “name”. But in that same family we find beb “illustrious, renowned”, ceba “to name, call”, dreb “brand, mark”, feb “notorious”, theb “noun”, treba “to mention” and many others.

Nouns have five possible cases: nominative, accusative, genitive, dative, and sometimes a vocative. Curiously, these are expressed by changing the initial consonant of the determiner (a word like “the”, “a”, “my”, “whose”, etc) that introduces the noun or the noun phrase.

There are two parallel patterns – one for indefinite words like “a”, “some”, “each” and the numerals; and another, listed below, that’s used with the remaining determiners:

The definite article (“the”) consists of the appropriate one of these consonants followed by a vowel that contrasts with the main vowel of the next word, which is often the noun but can also be something like an adjective. Despite not distinguishing singular and plural (or even dual!), the word for “the” thus has twenty possible forms:

Prepositions can be followed by a noun in the accusative, genitive or dative, and many of them in fact support all three cases with different meanings:

dhe
+ accusative “through”
+ genitive “located under”
+ dative “moving to under”

ga
+ accusative “along”
+ genitive “with, using”
+ dative “with, accompanying, near”

ie
+ accusative “except for”
+ genitive “despite”
+ dative “as well as, including”

The numerals are determiners, so they too indicate case. In the nominative they all start with vowels; consonants are prefixed to form the other cases. One to ten are aai, oum, out, on, eg, et, alh, oil, ag and yz.

Its other numerical curiosities include yzeur, which is a vague way of indicating a number between 10 and 20 (“umpteen”); euryz, a vague number between 20 and 90 (“umpty-something”); and pnoum “a couple, a pair” and pnoil “a group of eight people or things”.

To give you a flavour of running prose – and to continue a theme from an earlier article in this series – I’ll end with a short quotation from No Aalcy y se Autzair “Alice in Wonderland”, in Galivad’s translation. Observe, by the way, how even “Alice” (Aalcy) is introduced by the word for “the”.

“For a minute or two she stood looking at the house, and wondering what to do next, when suddenly a footman in livery came running out of the wood – (she considered him to be a footman because he was in livery: otherwise, judging by his face only, she would have called him a fish) – and rapped loudly at the door with his knuckles.”