Conlang Excursions 2: Down the Rabbit-Hole 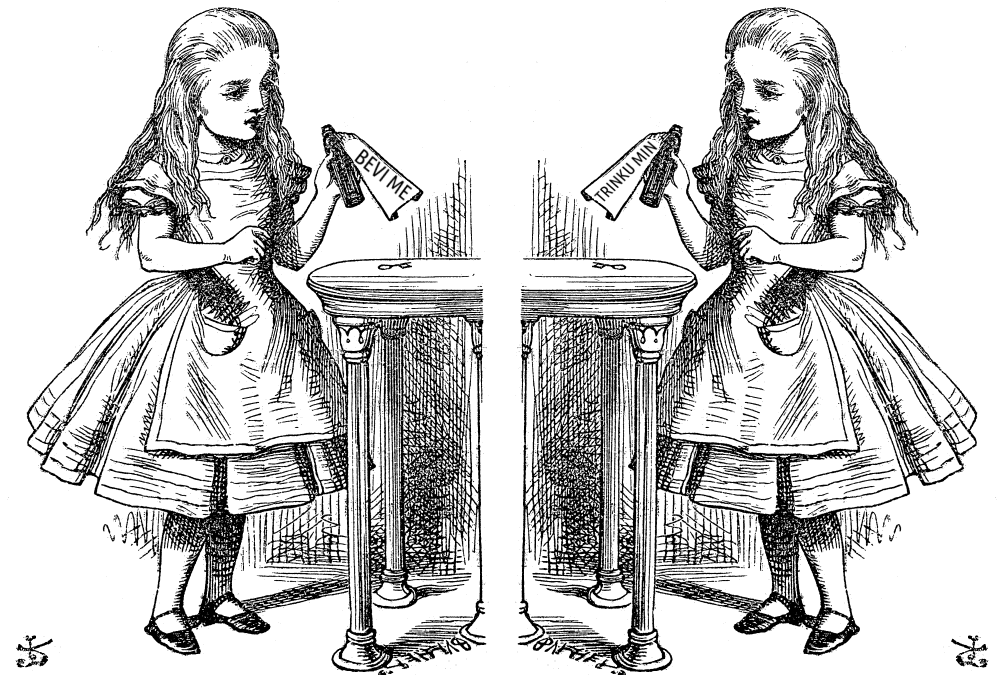 My previous post gave a brief sketch of Elefen, a.k.a. Lingua Franca Nova, a regularised Romance creole, and pointed out some of the ways in which it resembles and differs from Esperanto. This time I’ll be looking at how well these two languages fare at translating the wordplay in Lewis Carroll’s very English masterpiece of nonsense, Alice’s Adventures in Wonderland.

The Elefen translation – Alisia en la pais de mervelias – is my own work, done in 2010 and revised for publication two years later. This was the first book to be printed in the language, which thereby came of age. Tinkering with the vocabulary and grammar could in theory have gone on forever, but the book effectively set things in stone (with one exception, to which we will come).

In fact one rather significant piece of tinkering took place between the initial completion of the translation and its publication. The language gained the pronoun lo “it”, whose meaning had previously been part of el “he, she”.

This had beneficial effects in several places, including the discussion in chapter 3 of what it means in the phrase found it advisable – “when I find a thing,” says the Duck, “it’s generally a frog, or a worm” – the Hatter’s comment in chapter 7 that

If you knew Time as well as I do, you wouldn’t talk about wasting it. It’s him.

and the pronoun-heavy doggerel in chapter 12:

They told me you had been to her,
And mentioned me to him
[…]
An obstacle that came between
Him, and ourselves, and it.

This point is of no concern to Esperanto, which has had separate words for “he”, “she” and “it” from day one.

Given a further two years’ experience with Elefen, I was able to improve much of the wordplay in the printed translation, especially in the chapters involving the Mock Turtle. For example, when this character explains that

No wise fish would go anywhere without a porpoise. […] Why, if a fish came to me, and told me he was going a journey, I should say ‘With what porpoise?’

my original translation rendered the question as the excruciating Con cual in-tun-de? (“with what intention?”, where tun “tuna” is embedded in intende).

For the book, I changed without a porpoise to sin es acompaniada par tun “without being accompanied by a tuna” and then used O! par tun? “oh! with a tuna?”, punning on oportun “conveniently”.

In Esperanto, two versions of Alice exist. The first, La aventuroj de Alicio en Mirlando, is by Elfric Leofwin Kearney (1856–1913), a British educational examiner and a pioneer of the international language, which was only 23 years old when he published this work in 1910. Despite the title, he is not adventurous, tending instead to translate many puns literally and explain them in notes to the reader.

One such case occurs in the passage immediately preceding “With what porpoise?”, where there is a very tricky piece of extended wordplay involving whiting (the fish) and blacking (shoe polish). Here, bizarrely, Kearney actually offers two separate translations, one literal and one playing on merlango “whiting” and marlango “sea tongue” (because, says the Gryphon, a whiting’s tongue is always in the sea).

For with what porpoise, Kearney presents an interesting alternative flight of fancy in which the wise fish takes on the role of a travelling salesman who responds to the question ĉu vi havas afiŝon? “do you have a leaflet?” by pointing to his porpoise companion and saying jena fiŝo! “that fish!” (punning on jen afiŝo! “here’s a leaflet!”).

As an aside, Kearney uses fokeno for “porpoise”, which probably indicates that he was using Joseph Rhodes’ then very recent English–Esperanto Dictionary of 1908. The modern Esperanto word is foceno.

Esperanto’s other Alice is the almost identically titled La aventuroj de Alico en Mirlando by the prolific American/Australian translator Donald Broadribb (1933–2012). His 1996 rendition is ingenious and reads very smoothly throughout.

He transfers the whiting–blacking pun to apply to a snail (heliko) instead, retains the reference to the blackening (nigrigo) of shoes, reverses it to heligo “lightening” in the sea creatures’ strange world, and promotes both terms to full-blown sciences called nigriko and heliko. Oddly, though, Broadribb entirely omits the short section about the porpoise. Perhaps this was a rare case where the wordplay defeated him.

My Elefen translation ran into similar difficulty with this joke. I didn’t jettison the passage but was obliged to change the whiting to a squid (calamar), which, says the Gryphon, gets used like a lamp when one needs to look for something in the sea (per xerc’ a la mar). Ouch. Out of the three of us, Broadribb clearly wins this round.

As for the turtles’ schoolteacher, who they nicknamed Tortoise “because he taught us”, I made happy use of the homonymy of the word foca, which can mean either “seal” (the animal) or “focus”:

This comes in answer to Alice’s question “Why did you call him Tortoise, if he wasn’t one?”, and is arguably clearer in Elefen than in English, where turtles and tortoises are essentially indistinguishable to the untrained eye.

In Esperanto, “tortoise” is testudo, and Kearney tells us that the teacher was a well-known te-studento “student of tea”. Broadribb takes the easier route of punning on the verb testi: the pupils called their teacher Testudo because he “tested” them.

We’re informed that classes under the sea last an hour less each day, which is why they are known as “lessons”. Broadribb wins again here, saying that each day the study period becomes a fraction of what it was the day before, because leciono “lesson” coincidentally ends in -ono, Esperanto’s suffix for naming fractions like “half” and “quarter”.

I did something similar in Elefen, where the ending of the word leson looks exactly like the augmentative suffix -on (“a larger variant of …”), although this did mean I had to resort to using the nonsensical word leseta (built with -eta “a smaller variant of …”) to refer to the shortest classes. Kearney omits the passage.

The renowned Esperanto poet and translator William Auld (1924–2006) deserves an honourable mention here, since he translated the Mock Turtle’s stories of his schooldays as one of two extracts from Alice in the second volume of the Angla Antologio (English Anthology). In his rendition, the Turtle is called the Ŝajnkelonio, where ŝajn “seem” is used as a prefix and feels very natural.

I was particularly impressed by his translation of the school subject Fainting in Coils (wordplay for Painting in Oils, in Esperanto literally Olepentrado): for this he puts Hovepentado “Alas-repentance”, which evokes an image of someone falling to their knees – and thus brilliantly even manages to reproduce something akin to the idea of fainting.

One of the most famous puns in the story, leading as it does to a piece of concrete poetry in the curvy shape of a tail, is the Mouse’s “long and sad tale”, which Alice misconstrues as a reference to the animal’s rear appendage. As Alice has just asked the Mouse to tell her its story, the most straightforward way to handle this is to simplify the Mouse’s statement to something like “Mine is a long and sad one” – and indeed this is what both Broadribb and I do. Kearney, by contrast, becomes truly desperate and coins the nonce word tejlo to mean both “tail” and “tale”.

At the end of the poem, Alice says that the Mouse had got as far the fifth bend, to which the creature snaps back “I had not!” – leaving the girl wondering if she should help to untie this irritant knot.

In my original attempt at this, the Mouse shouted No dana la raconta! “Don’t damage the story!”, which Alice misheard as Un noda en la raconta? “A knot in the story?” The printed translation steers a less literal but more plausible course in which the Mouse cries Ma no! “But no!”, to which Alice replies that she thought the story was a tail, not a hand (mano).

Kearney’s solution here is obscure and not even footnoted: when the Mouse exclaims Mi ne! “I had not!”, Alice becomes perplexed, believing it to be calling out to a cat – minet being a French word for “puss”. But Broadribb’s approach is delightful: Vi ne aŭskultas mian odon! “You’re not listening to my ode!”, which Alice mishears as mian nodon “my knot”. In Elefen, if I had thought of it, this would have been Tu no escuta mea ode!, but I would have rejected it because mea ode doesn’t sound sufficiently like mea noda.

Incidentally, this is where we come to the exception to my earlier claim that the publication of Alisia fixed Elefen’s definition for good.

In 2012, mea ode would have been me ode, for at that time the possessive determiners – “my”, “our” and “your” in English – were still identical to the corresponding pronouns me, nos and tu (singular) / vos (plural). The introduction of the distinct possessive forms mea, nosa, tua and vosa is the only major change made to Elefen’s grammar since the publication of Alisia en la pais de mervelias. Prior to that, one could, if one wished, contrive mildly ambiguous sentences such as me vole es forte “I want to be strong / my will is strong”. The online version of my translation is up to date in this regard.

Elefen has seldom been used except in writing, and its spelling is thoroughly phonetic, so it was an interesting challenge for me to find ways to represent the eye dialects of characters like Pat in chapter 4, who says things like arrum for arm and ’em for them. In my translation, he drops the occasional unaccented vowel and misvoices the occasional consonant – lo ’s un brazo, S’nior! “it’s an arrum, yer honour!” (for es, braso, Senior) – and uses the idiosyncratic expression bon serta “good surely” in his frequent exclamations of “sure”.

Esperanto is perhaps more resistant to such tricks, and in Broadribb’s version, all that happens is that brako “arm” gets pronounced as barako, which – slightly jarringly – is also the word for “barracks”. It’s not clear to me why the translator didn’t pick a meaningless word like berako or burako to represent arrum. Kearney risks even less, merely stating that Pat has an Irish accent. To be fair, this doesn’t jar at all, because Pat’s line in the English text actually uses the standard spelling arm, and is followed up by a bracketed comment that “He pronounced it ‘arrum’.”

One final note on the Elefen translation may be of interest, regarding the playing-card characters at the Queen’s croquet ground in chapter 8. I decided to reassign their suits to better match the vocabulary, even though the result conflicts with John Tenniel’s illustration in which the gardeners are clearly the Two, Five and Seven of Spades. This suit is called spadas in Elefen, but the main meaning of that word is not “spades” (for digging) but “swords” – much more appropriate for the Queen’s soldiers to carry. Conversely, as the word for “clubs” (trefolias) also means “clovers”, this became the gardeners’ suit in the picture.

Like Alice on her journey through Wonderland, I have always been curiously fascinated to see familiar things in new environments, or even languages. In 2013 I went on to tackle the Elefen translation of Through the Looking-Glass (Tra la miror), whose first chapter contains that paragon of nonsense poetry, Jabberwocky – which I called Bocragonia to suggest that its monster is a type of dragon with a fearsome boca “mouth”. One could almost say that Jabberwocky is a miniature constructed language in its own right.

But enough of Elefen! In the next part of this series, we shall explore the mysterious language of the Anta…