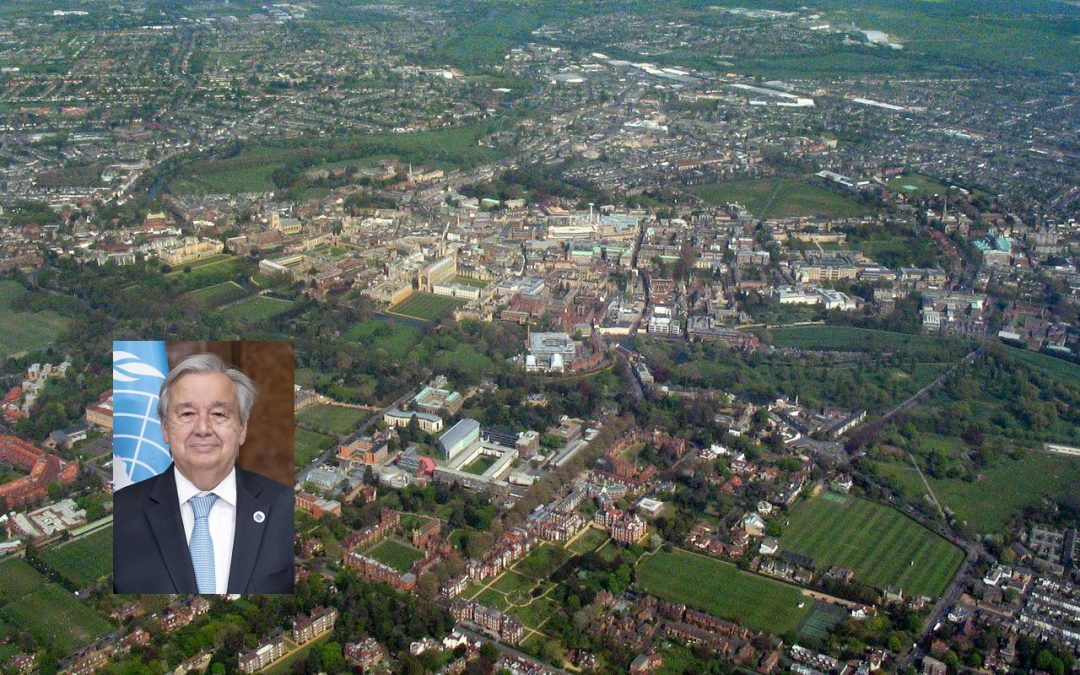 On 3 November, António Guterres, the United Nations Secretary-General, visited the University of Cambridge to receive an honorary doctorate. His words deserve particular mention and attention.

Thank you for this great honour. I know that through me, you are recognizing the work of my United Nations colleagues around the world.

Cambridge has enduring links with global governance and the United Nations, from John Maynard Keynes, who played such an important role in establishing international economic institutions after the Second World War, to Margaret Anstee, the first woman to be appointed Assistant Secretary-General.

The contributions of Cambridge’s scientists and mathematicians to global learning are unparalleled. Isaac Newton, Charles Darwin, Rosalind Franklin, Alan Turing and Jane Goodall are just a few of the global giants and pioneers educated here.

It is clear that Cambridge students do not only learn. They learn how to learn, how to think for themselves and harness their intellectual curiosity for the common good. Or as John Milton, who graduated from this university nearly 400 years ago, put it: “Give me the liberty to know, to utter, and to argue freely according to conscience, above all liberties.”

Ladies and gentlemen, we need that Cambridge spirit today more than ever.

I have just arrived from COP26 in Glasgow, the focal point of global efforts to avoid the worst impacts of the climate crisis. Cambridge University is at the forefront of efforts to tackle these crises, through Cambridge Zero and the Cambridge Conservation Initiative. And the Cambridge Institute for Sustainability Leadership is demonstrating that academia and the corporate sector can work together to drive transformative change.

Ladies and gentlemen, beyond our war on nature, we face a crisis in the values on which the United Nations was founded 76 years ago: trust, solidarity, truth.

Levels of inequality are breathtaking. Billionaires are competing in outer space while millions struggle to survive here on earth. Poverty and hunger are rising for the first time in decades. Human rights are under fire. Geopolitical divisions threaten to paralyze international cooperation. Unregulated technologies present enormous new risks. Trust between people and institutions is fraying. Conspiracy theories and disinformation are fueling social divisions and polarization. The COVID-19 pandemic has exposed a world of fragilities and injustice. A world of winner takes all; and devil take the hindmost.

Scientists, including here in Cambridge, succeeded in understanding the virus and its mutations through genomic sequencing, and developed vaccines in record time. But grossly unequal access to those vaccines means that less than five per cent of people have received even one dose in low-income countries. This is not just immoral; it’s stupid, because it increases the risk of new and more dangerous variants. And lopsided vaccination rates are creating a lopsided recovery, which will ultimately cost trillions to the entire global economy.

The same selfish short-termism is apparent far beyond the pandemic, in global approaches to nuclear disarmament, artificial intelligence, the regulation of new technologies, and many other areas.

Global governance is at a crossroads. Either we work together with renewed solidarity to build sustainable, inclusive societies and economies, based on human rights and human dignity for all. Or we resign ourselves to a future of perpetual insecurity and crisis.

Ladies and gentlemen, dear students, in response to these disturbing global trends, the United Nations has embarked on Our Common Agenda, an initiative to strengthen multilateralism and make it fit for the 21st century. Our Common Agenda includes more than 90 recommendations grouped around four broad themes.

First, there is an emphasis on the long-term thinking and solidarity with future generations. A Summit of the Future will explore ways to strengthen the governance of global public goods including peace, global health, a livable planet, and digital technology.

Second, Our Common Agenda proposes a renewed social contract for the 21st century, anchored in human rights. This must include universal health coverage, income protection, housing, decent work, and access to education and training. This will only be possible for all countries through a New Global Deal, that ensures the developing world gets the support it needs from developed countries and international financial institutions.

Third, Our Common Agenda will bring a strong focus to facts and science. I will re-establish an Advisory Board of Scientists and establish a UN Futures Lab to strengthen the role of the United Nations as a reliable source of data and evidence. As part of this emphasis on facts, Our Common Agenda proposes that governments, media outlets and regulatory bodies should work together on standards for integrity in public debate. In short, we must make lying wrong again.

And fourth, the United Nations of the future must be more inclusive and networked than ever before. When the United Nations was created, multilateralism meant governments working together towards common goals. Today, those with global influence encompass civil society, the private sector, cities and regional authorities, academia and more.

Universities hold many of the solutions we need. Not only climate scientists and pharmacologists, but sociologists, lawyers, economists and experts in every discipline are researching ideas that can lead to breakthroughs for the common good. Many of the next steps in implementing this ambitious agenda now lie with our Member States. And those Member States represent you.

I urge everyone with an interest in these issues – and that means everyone – to make your views known, through the ballot box and through civil society organizations, including the very active United Nations Associations here in Cambridge and at the UK national level.

Ladies and gentlemen, dear faculty and students, values, principles, truth and integrity are at the heart of the liberal education that Cambridge has offered the world for 800 years. Scientific research and cutting-edge technology are nothing without them. We need institutions dedicated to learning, not profit; to critical thinking, not power; to pushing the boundaries of human understanding; to discovery and wonder; to facts and science.