The Esperanto World Congress that almost did not happen: Barcelona, 1909 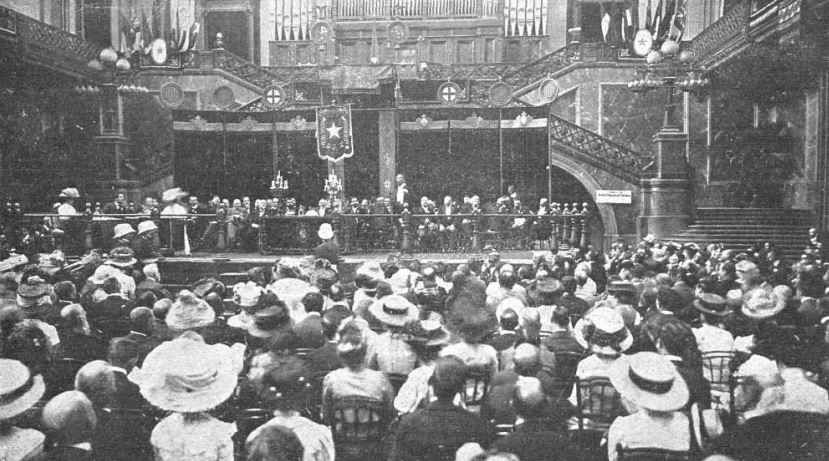 Since their origins, Esperanto World Congresses have been more than a celebration. They are living proof of Esperanto’s success and popularity. The benefits congresses bring to the movement are beyond question and have been thoroughly discussed within both Esperantism and academia. Yet there is more to them. Like Eurovision or the Olympic Games, the World Congresses offer the hosting nation a unique opportunity to present itself to the world. In the early 20th century, when the world was not as interconnected as it is today, these multitudinous events were even more valuable.

The interest in organizing a World Congress grew across nations as Esperantism gained popularity in the 1900s. However, very few Esperanto communities had the necessary resources, in terms of individuals and money, to be seriously considered. As a voluntary movement, many Esperantists contributed with their own funding to journals, societies and courses, which only on rare occasions became profitable enterprises capable of sustaining themselves. If these small projects were already a challenge to keep afloat, the organization of an international congress was even more daunting.

Yet the success in the first congresses inspired many national communities to try, including some in the Iberian Peninsula. As we know today, Barcelona was chosen to host the 5th Esperanto World Congress in 1909. The week of celebrations was indeed a success like that of its predecessors, but a series of political upheavals and some increasing tensions between different Spanish Esperanto communities almost put an end to Catalonia’s Esperantist dreams.

Despite its apolitical stance, Esperanto was not immune to politics. Even as an independent social movement, its activists had to work within the political framework of states, navigating censorship and striving to gain governmental support that could bring with it some life-saving financial aid.

When Esperantism began to take root in Spain, it did so more vigorously in certain regions, especially Catalonia. There, in the second half of the 19th century, a strong nationalist movement had begun to take shape. With the Catalan language and culture at its core, this phenomenon shared many attributes with Esperantism, and soon there was a vocal group of Catalan nationalists involved in the Esperanto movement. They saw in the planned language a tool like any other that could help them spread the word about their struggle, while gaining international recognition as a distinct nation.

Yet Catalan nationalism was not an innocuous movement. The Spanish central government, as well as Spanish nationalists – i.e. those who understood Spanish identity as the expression of Castile’s values, culture and language – saw Catalanism as a threat to the unity of the state. Any form of regionalism that celebrated particularities and presented a fragmented picture of the country was deemed to be against Spain’s integrity. Considering the difficulties the country was going through after the loss of its last overseas colonies in 1898, any further fragmentation of Spain, especially on the mainland, was a risk the government could not afford to take.

Therefore, when in 1906 Catalan Esperantists expressed their desire to host a World Congress, their Spanish counterparts did not hesitate to state their interest, too. Spain put forward three different cities: Valencia, San Sebastián and Burgos. The first two were strategically placed in well-connected parts of the peninsula and had significantly strong Esperanto movements. But they were located in areas that, like Catalonia, had their own national languages and were therefore not the purest expression of Spanish identity. The last one, Burgos, offered an insight into the kind of united Spain the central government was interested in promoting abroad. As these candidatures were unlikely to make the cut, Spanish Esperantists agreed to withdraw them in order to support their Swedish colleagues, who aspired to host the event in Stockholm. It was seen as being in the better interests of the country to have a foreign nation organizing the World Congress than to let the Catalans use it for their own nationalist interests.

Eventually, Barcelona was chosen to host the 5th World Esperanto Congress, forcing the Spanish Esperantists to embrace the result and try to make the most out of it. However, this was not the last challenge the Catalan congress would have to face. 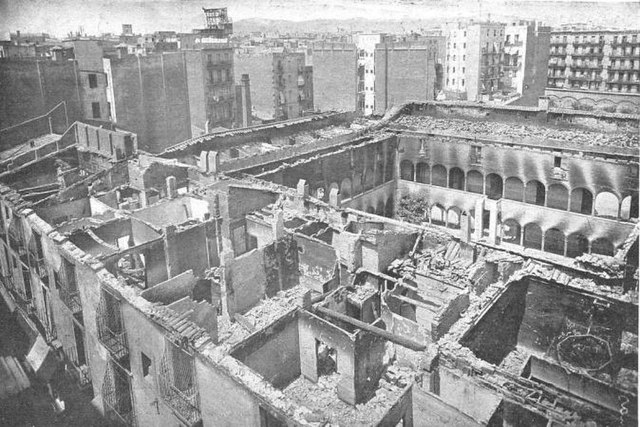 A convent destroyed during the Tragic Week

On 26 July 1909, a general strike hit Barcelona just a few weeks before the meeting was to take place. Although the local and central governments believed they had the situation under control despite the massive success the strike initially achieved, martial law was declared. The events that unfolded came to be known as the Tragic Week: seven days marked by the construction of barricades, the involvement of approximately 30,000 individuals, and over one hundred civilians reportedly killed.

Speculation and rumours surrounding what was happening in the Catalan capital grew, and Esperantists everywhere started to question whether the congress should proceed as planned or if moving it to a new location would be a safer and more reasonable option. Esperanto journals barely addressed the issue, probably because of their apolitical nature and their determination to stay clear of any political matters – but, behind the scenes, contingency plans were drafted.

Once the strike was brought to an end and the army left the streets of Barcelona, the Catalan committee reassured the Esperanto community of the viability of the meeting, which in the end took place in early September 1909. The event, however, was defined by the extraordinary conditions imposed by the central government, as it was feared that the congregation of a large crowd would reinvigorate the recently tamed flame of revolution.

Not everything was bad news. The 5th World Esperanto Congress was the first to be formally recognized by the national authorities of the host country, with the king, Alfonso XIII, acting as the honorary president. Members of other foreign governments, such as the official delegations from the United States, Belgium and Norway, were also present at the time.

The unbreakable perseverance of Catalan Esperantism was an invaluable asset to the movement.

Pilar Requejo de Lamo came to the University of St Andrews, Scotland in 2018 for an MLitt in Intellectual History and with a degree in International Relations from King Juan Carlos University in Madrid.
Ĉi tiu artikolo estas ankaŭ disponebla en Esperanto.