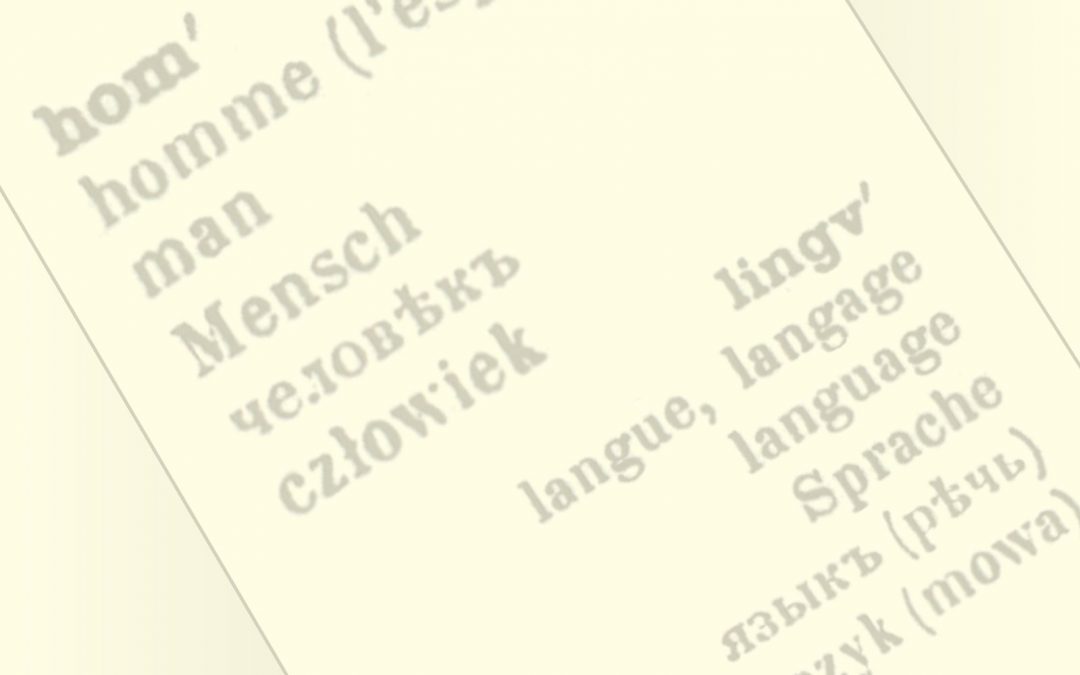 As human society evolves, some things stay much the same. Among Esperantists, a love of languages remains a very common feature.

La homa lingvo, a book published by UEA in 2019 with extensive notes and a parallel English translation on pages facing the Esperanto, nicely illustrates the constant nature of this phenomenon. Ninety-five years ago, Esperantists were so interested in languages that the Esperanto department of the prestigious Berlin publishers Rudolf Mosse asked the English Germanist William E. Collinson to write a short popular introduction to the subject for Esperantists. Most surprisingly, he barely touches on the topic of Esperanto, preferring to present his educated but non-specialist audience with the answer to a wider question: what is human language like?

Before continuing, it’s worth asking why the publisher foresaw such interest and such a large readership for this subject among Esperantists. Though every member of humanity uses one or even several languages every day, as far as the market for books is concerned, general introductions to linguistics (a term lent support in Collinson’s book, despite the preference of the time for “philology”) tend to fare poorly.

Esperantists have an extraordinary interest in languages, because Esperanto speakers’ own identities have been and continue to be created and defined by language. Language very seldom fully vanishes into the background, because there’s always something present to contrast Esperanto with other languages: a street sign, a national-language book nearby, a hit song in a national language as background music at a congress centre. Just like the speakers of minority and suppressed languages, Esperantists cannot think of their language as merely a vehicle for thought; its distinctness, coupled with constant subconscious comparisons, make them aware which parts are universal and which are unique. This is why La homa lingvo was commissioned – for an audience eager for scientific explanations of the phenomena they experienced.

Similarly in our era, people on the Esperanto Wikipedia write pages in a fluent and fairly detailed way about languages, linguistics and everything related to language (including Esperanto, of course), while pages about other occupations or specialities are non-existent or mere stubs, regardless of their actual popularity in the world. For instance, the world’s most popular sports team, Manchester United, whose page is “outstanding” in at least ten Wikipedias, gets a short paragraph in the international language. This shows, respectively, a shared passion and passivity in a work that any Esperantist can improve.

The comparison with Wikipedia is apt in several ways – Collinson often mentions other popular articles, for example in the magazine Esperanto, relieving himself of the need to address a related phenomenon when an explanation already exists in the international language. This assumption, that everyone has some sort of archive of old issues to hand, is rather like a historical hyperlink. People wouldn’t expect this in a specialist book – by convention, they expect a full explanation, even if someone has done it better elsewhere. Furthermore, sources are spread very thin – on almost every page a quotation might help a specialist follow the arguments more deeply and identify the origins of briefly presented propositions. But writing for specialists was never Collinson’s aim.

So is it strange that Davies has translated and editors Tellier and Jansen have annotated Collinson’s text as though it were an actual specialist work that deserves interpretation, rather than just a light paperback of a hundred pages? Partly. While the English translation is very good and precise, my impression is that it was translated more to justify the existence of a new, specialist edition of the book than in response to anybody’s clear desire to discover, through the language in which science is most frequently read, what kind of works of popular linguistics Esperantists were reading in the 1920s. Perhaps some historiographer of linguistics will wonder how the subject is presented in various languages and praise this translation in one of their research papers. That would be an optimal result, but I doubt it will come about. Often the wish to display Esperanto’s depth to the external world for propaganda reasons exceeds the market’s demand, thwarting a venture in reality. It is always worth asking whether anyone actually needs the item that is being proposed. (Such assessment is notable by its absence both in the Esperanto world and in general specialist situations nowadays, so I am not surprised that it is equally lacking at the place where those interests intersect.)

But this criticism in no way applies in the case of the Esperanto text. It is a real gem of early, fluent Esperanto from before the standardising effect of larger grammars and dictionaries. Any Esperantologist can read the book with great interest, assisted by the plentiful Esperanto notes (the English ones are much less detailed, as the subtleties of linguistic or stylistic evolution would be lost in translation). Just as to the editors, to me most interesting were the stillborn neologisms, rival forms (“ira” for “irlanda” [Irish], “Germanlando” for “Germanujo” [Germany], and “bao” for “beo” [baa]) and the inconsisent verbalisation of adjectives. In addition, I find the usage of the participles particularly fascinating and slightly clarifying of Collinson’s partial support for the “atismo” (tensist) interpretation. The editors also don’t hesitate to criticise PIV (the dictionary Plena Ilustrita Vortaro), often quite rightly, when Collinson’s wording or disposition seems more logical and fresh in spite of its age. Such a detailed analysis of a lengthy text is fairly rare in the Esperanto world, but I would welcome it also in other important early works – especially if the notes were actual footnotes.

This lack of notes at the bottom of the pages is felt all the more because the combination of glue binding and thick paper yields a book that can only be opened with Herculean effort. In a book with such detailed content, it’s nice to be able to lay the spine on your desk to analyse things without having to force the book open, a thumb on the margin at each side. Then again, I trust that a book as robust as this will last for a hundred years more, even if regularly consulted.

Here and there, ideas are found that took a long time to ferment in the Esperanto world – such as Jespersen’s principle, repeated by Collinson, that in grammar one should not unfailingly impose the model of ancient languages on modern ones (48, 50). Until PMEG (Plena Manlibro de Gramatiko) appeared, the mainstream of Esperanto grammar had not followed this wise advice – and people continue to regard PAG (Plena Analiza Gramatiko) as better, largely because of its classical presentation (even though both grammars, regardless of terminology, have their strengths and weaknesses). This pro-classical barracks is where the editors reside, who extraordinarily for the present day cite PAG exclusively in the notes (14).

If Collinson originally wrote his book to edify Esperantists, is the book still able to serve this purpose? Probably not. Brevity notwithstanding, the subject has evolved so much during the last hundred years that even Collinson’s generalised remarks fail to illustrate its state. What’s more, the outdated mindset of the people of his time (who unhesitatingly labelled various societies and thus their languages as primitive), while very mild in Collinson, is not entirely avoided. Wikipedia would likely be more helpful at giving an overview to people who want one. But those who are interested in the evolution of Esperanto or simply wish to experience a masterfully commented text, should add the book to their collection. After nearly a hundred years, the popular has become specialist.

Hans E. Becklin is a member of the ESF Board and a Lutheran priest.
Ĉi tiu artikolo estas ankaŭ disponebla en Esperanto.