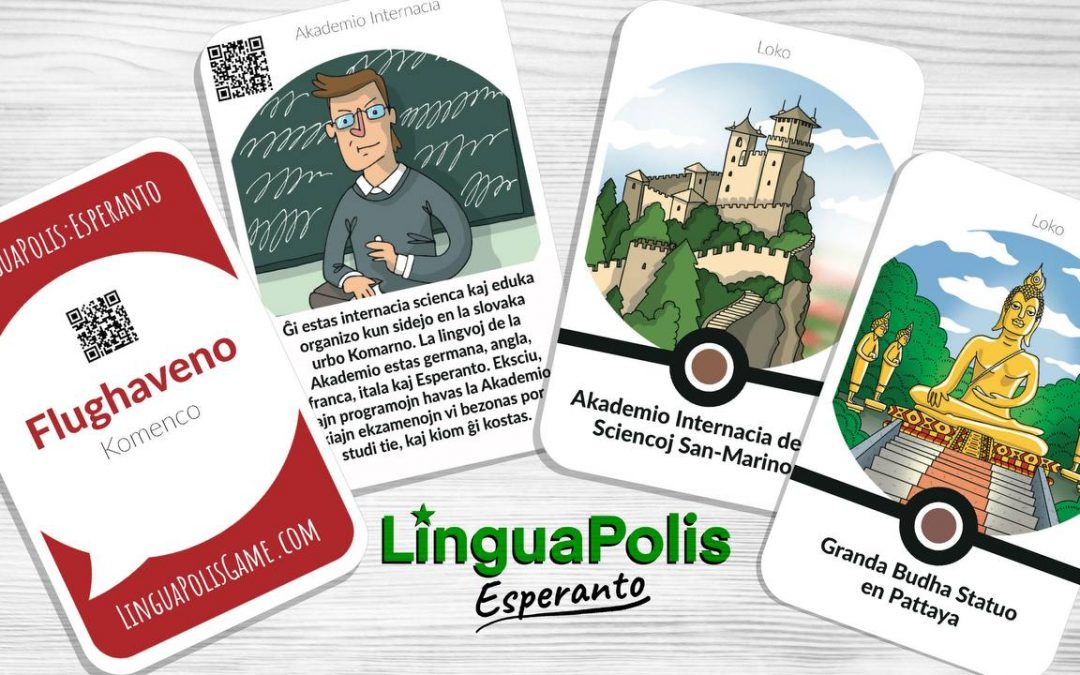 Gamification – using game thinking and game mechanics for educational purposes – is building momentum. Several academic journals are dedicated to this exciting new trend: the International Journal of Game-based Learning, Serious Games and the Electronic Journal of e-Learning, among others. There is also an annual conference, the European Conference on Game-based Learning, next year in Lisbon, Portugal. Language educators recognized the value of gaming long ago: motivation, feedback, collaboration, engagement quality and a low anxiety level make games the perfect tool for language acquisition.

Like many language teachers, I have used a variety of board and computer games in my classroom – games that are specifically designed for language learners (many notable examples can be found in Games for Language Learning by Andrew Wright, David Betteridge and Michael Buckby) as well as those that are meant for native speakers (Monopoly, Scrabble, Bingo, etc). But something was always missing – a game to bring a real-world context to the classroom and motivate students to speak. Although there are many exciting board games where players explore fantasy worlds and solve creative problems, I wanted to transport my students to a real city, where they could visit local places of interest and experience their history and culture.

That is how LinguaPolis came to be. First, a friend and a wonderful illustrator Stas Kapustin helped me to put together LinguaPolis New York, a card game, built on the idea of exploring New York City and practicing conversational English. The players, arriving at John F Kennedy International Airport, travel around New York where they encounter everyday situations: shopping, renting a car and going out. The game consists of two sets of cards: the locations – the city’s most famous attractions and common public places – and the events, which lead to the players’ adventures. For example, a stolen wallet might lead to a conversation with a police officer. The player who communicates best, and arrives at their hotel before the other players, wins.

The game became a commercial success and we followed up with LinguaPolis Moscow for practicing conversational Russian. 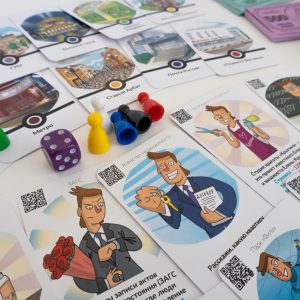 What was even more exciting: the games began accumulating a community of practice around them with game-night gatherings and LinguaPolis clubs popping up around the world. The plan was to slowly build new games for new languages: French, Spanish, German…

At this point, we began receiving emails from people asking us to create a game for minority languages or the languages that were dying off and had a very few speakers. A new sociolinguistic meaning that LinguaPolis could gain inspired us to look for a new project that went off the beaten path. Instead of engaging with the celebrated French-Spanish-German triad, we searched for a language that would unite all the nations and yet stays on neutral political and cultural grounds. That is how LinguaPolis Esperanto came to life. Thanks to the Esperantic Studies Foundation’s Interlinguistic Support Fund (ISF), we could pilot a new game while building it and conduct associated research on foreign language speaking anxiety.

What is in the game?

The LinguaPolis Esperanto game board consists of various locations around EsperantoPolis, an imaginary transnational city that connects prominent landmarks and cultural objects of the world (e.g. the Eiffel Tower, or the Leshan Giant Buddha in China). As the players travel from the airport to the hotel, they experience Esperanto in a variety of real-life speaking situations: dining at a restaurant, navigating public transportation, and sharing their life stories with a friendly cabbie. The only way to make it to the final destination is to communicate effectively (in Esperanto!) and mind the budget.

Speaking a foreign language is not easy, even if one knows it well. Many language learners avoid speaking in public, and, as a result, rarely improve their language skills beyond reading and writing. LinguaPolis Esperanto creates a safe, fun, yet realistic environment, where learners can slowly warm up to speaking Esperanto.​

Instead of practicing abstract meaningless situations and memorizing lists of unrelated words, the game encourages speaking about things that actually happen in everyday life: shopping, driving, going out, hailing a taxi, etc.

By rehearsing simple everyday conversations with LinguaPolis, speaking in real life will become much easier. That’s our solution for speaking anxiety about language barriers. If you manage to survive a medical drama in LinguaPolis Esperanto (in one of our game scenarios), introducing yourself in real life will be a piece of cake.

The game implies at least two players, which means that everyone gets to learn something new from another player and share their knowledge in return. Peer coaching can be a powerful tool for language learning. 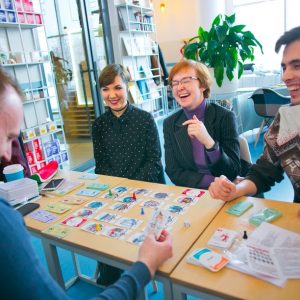 Playing LinguaPolis New York (with a teacher or without)

By “visiting” EsperantoPolis the players connect to speakers of other languages, become familiar with different cultures and traditions, and become true cosmopolitans.

All materials created as part of this project (the print-n-play PDF of the game, the digital version to be played on Google Jamboard, the audio recordings in Esperanto, etc.) will be available on our LinguaPolis Esperanto page, where we also invite volunteers to contribute to the project.

LinguaPolis Esperanto is more than just a game. Based at University College London, LinguaPolis is a research project that investigates the relationships between educational gamification and foreign language speaking anxiety. We welcome prospective participants to take part in our linguistics experiments, where we play games in foreign languages and share our thoughts about it.

Shying away from speaking a new language is one of the most common reasons why language learners progress slowly. Gamification offers solutions for alleviating speaking anxiety and improving language skills quickly. The positive emotions that learners experience when playing a game help to relax a so-called language ego – the identity a person develops in reference to the language they speak (Guiora, 1994; Dornyei, 2005). We hope to share more important insights on this aspect of language learning soon.

Once again we thank the Esperantic Studies Foundation for making the game and the associated research project possible! Check with us for updates and new Esperanto-related materials.

Other interesting reads on the topic:

We will be happy to reply to questions, comments etc.

Dr. Vita Kogan is a Lecturer of Linguistics at Queen Mary University of London, UK. Before moving to England, she served as an Assistant Professor at the Defense Language Institute and coordinated and taught language programs at the Middlebury Institute of International Studies, Concordia College, and the University of Pittsburgh (USA).

Stas Kapustin is an illustrator and photographer working on a wide range of international projects from visual advertising to illustrating books and designing board games, and a co-author of the language-learning board games LinguaPolis New York and LinguaPolis Moscow.