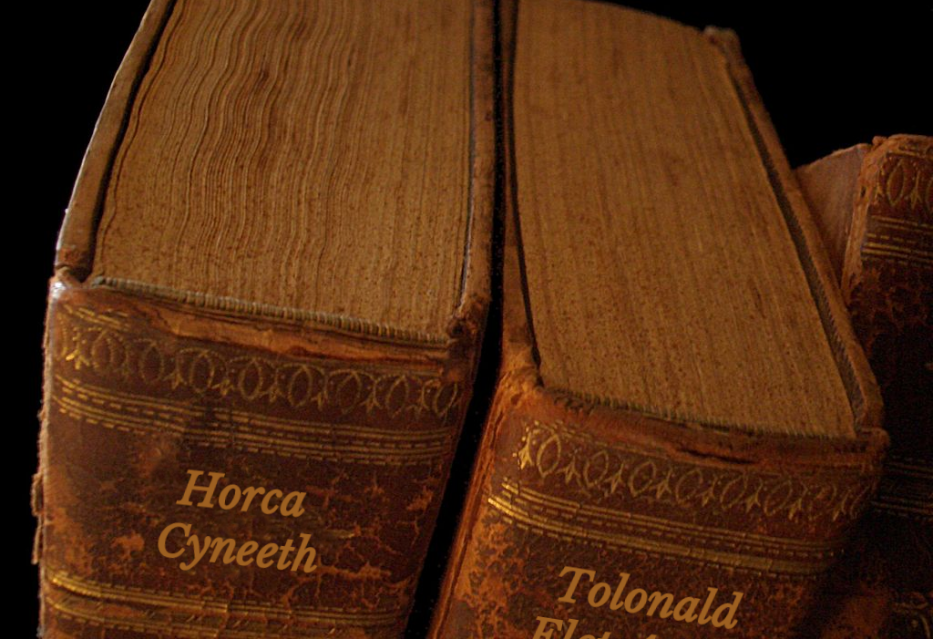 “It is hard to know whether the Anta are a nation, a religion, a secret society or a mixture of all three. They have apparently been living in the British Isles for at least a thousand years, and there are thought to be between ten and twenty thousand of them, scattered through the rest of the population and quite indistinguishable from them.”

They are also entirely the product of the imagination of John Fisher, an academic computer specialist who died in 2007. On his website, now only accessible via the Wayback Machine, he describes them as having a king and queen, their own religion, and a social structure organised into small groups (or cay) of no more than twenty people each.

The Anta’s relevance to this blog series is that they also have their own very curious language, known as Elet Anta “Anta Language”.

Fisher documents this with remarkable thoroughness, claiming that he is merely passing on knowledge he has gleaned from the surviving fragments of two old books, Horca Cyneeth “Grammar Framework” and Tolonald Elet Antaa “Anta Language Dictionary”, aided by a few anonymous contacts from within the Anta community itself. Needless to say, the information is in reality entirely his own invention.

The language is non-Indo-European, though a smattering of words appear to have Indo-European roots:

In addition, the Anta seem to have borrowed a small number of terms from the English during their centuries-long cohabitation of Britain:

The spelling system is simple and regular, with a slightly Welsh feel. The sound k is spelled c; k is reserved for the sound of ch in Bach. Five sounds are written as digraphs with h: ch, sh and th are pronounced as in English chin, shin and thin, lh sounds like the ll in Welsh llan, and rh is a voiceless r. Lh and rh are rare, occurring in fewer than 20 words between them.

There are seven vowels. A, e, i, o and u have their typical European values, while oe is the sound heard in French yeux and y is like the French u or the German ü. Y also serves as a consonant, as in English yes, when it’s next to a vowel. The spelling occasionally doubles a vowel (as in cyneeth above) to indicate a lengthened pronunciation that also takes the stress. The stress otherwise falls on the second-to-last vowel (tolonald “dictionary”) or the third-to-last when the last two are consecutive (asanial “dancer”).

Fisher states that Elet Anta has its own traditional alphabet, the Voronye Tacald or “Old Script”, dating back at least eight hundred years and overhauled by the Language Council (Curthas Eleccwaa) in the second half of the nineteenth century, but apparently little used since the Second World War. Sadly we are given no further details, other than a passing comment in the dictionary that the lengthened vowels were originally written with a superscript dot.

The Curthas Eleccwaa is mentioned several times in Fisher’s pages, mostly as an academy of fuddy-duddy grammarians who decry:

Let’s unpack this phrase to get a flavour of how their sacred language actually works.

Dorosh is a verb, meaning “to be terribly unpleasant”. Interestingly, the Elet Anta vocabulary contains absolutely no adjectival roots. A thought such as “the dog is old” is expressed using a stative verb:

Adding -ye (sometimes -y’ or just -y) to a verb puts it into what Fisher calls the attributive form, which is somewhat like a participle in English:

So doroshye is the adjective “(being) dreadful”.

Our next word is la-cawl-blavadsu “rotting away”. Blavad is the verb “to be rotten, putrid”. To make it mean “to rot, putrefy”, one adds the particle cawl “become”. La is a further particle that means “entirely, right through to the end”, so the verb la cawl blavad means “become entirely rotten, rot down to nothing”.

The -su at the end of blavadsu is a suffix that derives a noun to name the action of a verb – in this case the act of “rotting away”.

The fascinating thing about Elet Anta’s derivational suffixes is that they are all truncated forms of nouns. Thus avicwa “woman” and arecwa “man” yield the suffixes -avi “female” and -are “male”:

And eleccwa “language” becomes the suffix -elet in the word Antelet, which is another name for the Anta language.

Why does the full form of all of these nouns have much the same ending, -(c)wa? It would seem that the suffixes actually came first, and that this ending was added later in the language’s history as a way of building nouns to capture the essence of the suffixes’ meanings. But who knows? Fisher calls them cwe-nakttolon “Q-nouns”, because of the similarity between -cwa and cwe (the name of the letter Q), even though there is no Q in the Elet Anta alphabet!

Truncated Q-nouns have several other uses, too. Importantly, they’re pronouns: are and avi mean “he” and “she”. Furthermore, they can also be used as first- and second-person pronouns, to emphasise the gender of the person speaking or being spoken to. Something similar occurs with in “I” (from incwa “speaker, messenger”) and et “you” (from eccwa “witness”) – if you were listening to a lecture and wished to interrupt, you would call yourself et and the speaker in. Very confusing for outsiders!

A third use of truncated Q-nouns is as classifiers to proper names, as in:

Amil and its female equivalent athal also serve as respectful pronouns. In fact, rather strikingly, any truncated Q-noun can be used as a pronoun to refer to the previous noun with that suffix. So in a discussion about a dictionary, ald could denote tolonald, and su might stand for doroshye la-cawl-blavadsu “dreadful rotting away”.

This brings us back to our example phrase, the rest of which is now fairly straightforward to analyse: anty’ eliany’ eleccwaye salaythsuu. Ant “we in the Anta” is the truncated form of the Q-noun antwa “the Anta people”, and antye just means “our” in this sense. Elian is the verb “to be holy”. Eleccwaye is the adjectival form of eleccwa “language”. And salaythsu is the noun naming the action of the verb salayth “be beautiful” – so it means “beauty”.

Adjectives qualify the closest following noun – but curiously eleccwaye, while adjectival in meaning, still counts as a noun for the purposes of this rule. (Fisher calls it a noun in the attributive form.) So antye and elianye both describe eleccwa (“our sacred language”), and the -ye of eleccwaye is in effect added to these three words as a group, which then describes salaythsu:

If your enthusiasm hasn’t itself rotted away by now, you may wish to know why the u of salaythsuu is doubled. It’s because this noun is in the so-called “definitive” case, one of whose uses is to mark the subject of an accompanying intransitive verbal noun – in this case, blavadsu “rotting”. You also find the definitive in proper names and titles like Horca Cyneeth “Framework of Grammar” when the first word is not a truncated Q-noun. English tends to use a preposition in such cases: “the rotting away of the beauty”.

This leads me to the final quirk of Elet Anta grammar I’d like to mention: the language has no prepositions whatsoever. Instead, it has roughly four dozen special words that either stand alone as verbs – meaning things like “to be behind” or “to be because of” – or are suffixed to nouns to express preposition-like meanings.

The suffix-verbs are also used to create something equivalent to subordinating conjunctions, in the form of adverbs that link sentences and clauses together. Just as adjectives end in -ye, -y’ or -y, so adverbs end in -wa, -w’ or -w:

Ya is a special pronoun that represents the whole of the adjacent clause. It often corresponds to the English word that when this introduces a subordinate clause. Here is an example from one of Aesop’s fables:

But – very salaythwa! – this word ya will happily accept suffix-verbs. Here are two more examples from the fable, using irto “to be about, to be on the subject of” and afga “to be after”:

“The North Wind and the Sun” is just one of over a dozen Elet Anta texts that Fisher presents and explains on his website, including an amazing translation of fifteen lines of Dante’s Divina Commedia into hexameter verse. If you search the archives of the Conlang Mailing List, you can unearth quite a few more from between 1998 and 2000.

The website also contains the first five lessons of a course that Fisher unfortunately never finished writing, along with an impressively comprehensive dictionary, offering over 2500 roots with several thousand derivations and copious examples.

It’s clear that he spent a lot of time selecting words that sounded appropriate for their meaning. Like gorof “dog” and brath “horse”, many animals have onomatopoeic names:

are truly delightful, as are:

Others are less obviously symbolic, yet still seem highly plausible:

One of my favourites is the general term for a large bird, which is marf. Smaller birds are called tanlir, loosely related to the verb tanlin “to sing”. There are lots of internal etymological connections like that to be found within the vocabulary:

lawna “to feel nostalgic, to miss”
lawan “to be conservative”

The site’s introduction briefly entertains the “ridiculous idea” that the Anta may be using some kind of magical powers to conceal themselves from the rest of the British population. Be that as it may, their language has certainly concealed itself well since John Fisher’s death.

This is a pity, because Elet Anta is a brilliant and engrossing piece of work that I think deserves to be better remembered. Hopefully this article will put it ever so slightly on the map.