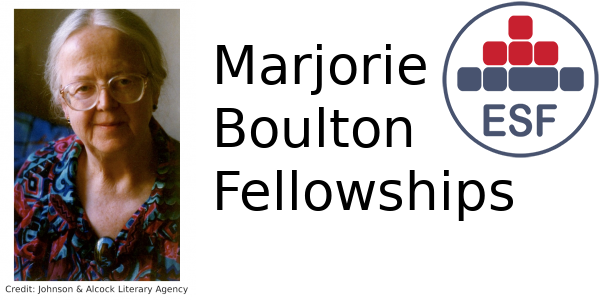 When Marjorie Boulton, died in Oxford a few years ago, the Esperanto movement lost one of its greatest advocates and most accomplished writers. Her career included many years as a teacher of teachers, both in the classroom and as head of a teacher training institution associated with the University of Lancaster in the UK. At the same time she produced introductory works on the study of language and literature, used by generations of students in higher education. And she wrote poetry – exquisitely crafted poems in the International Language Esperanto, plays, short stories, essays. She was also an advocate – for scholarship (she was the author of the standard biography of the founder of Esperanto, L.L. Zamenhof, in two separate editions, one English and the other Esperanto) and for Esperanto.

So when the Esperantic Studies Foundation (ESF) decided to establish two fellowships, one for doctoral research and the other for postdoctoral research, it made sense to name them for Marjorie Boulton.

We should be clear about one thing, though. When ESF was first set up, half a century ago, the founders chose the word “Esperantic” to indicate that it was not an Esperanto organization but a foundation interested in all things Esperant-ic, in other words all things having to do with finding ways of improving international linguistic communication, especially through the use of effective language planning. Esperanto is certainly a major part of ESF’s work, but by no means the only one. The same applies to the Marjorie Boulton Fellowships. We’re looking for originality, for barrier-breaking ideas, and for ways of interpreting the past, present and future of the pursuit of equitable ways of communicating through language. Some of the proposals may concern the phenomenon of Esperanto in its many facets, but some may spread the net more widely, and across disciplines.

Find out more about these awards.

The deadline for applications is June 1, 2021, and applications may be in either Esperanto or English. We look forward to hearing from you!