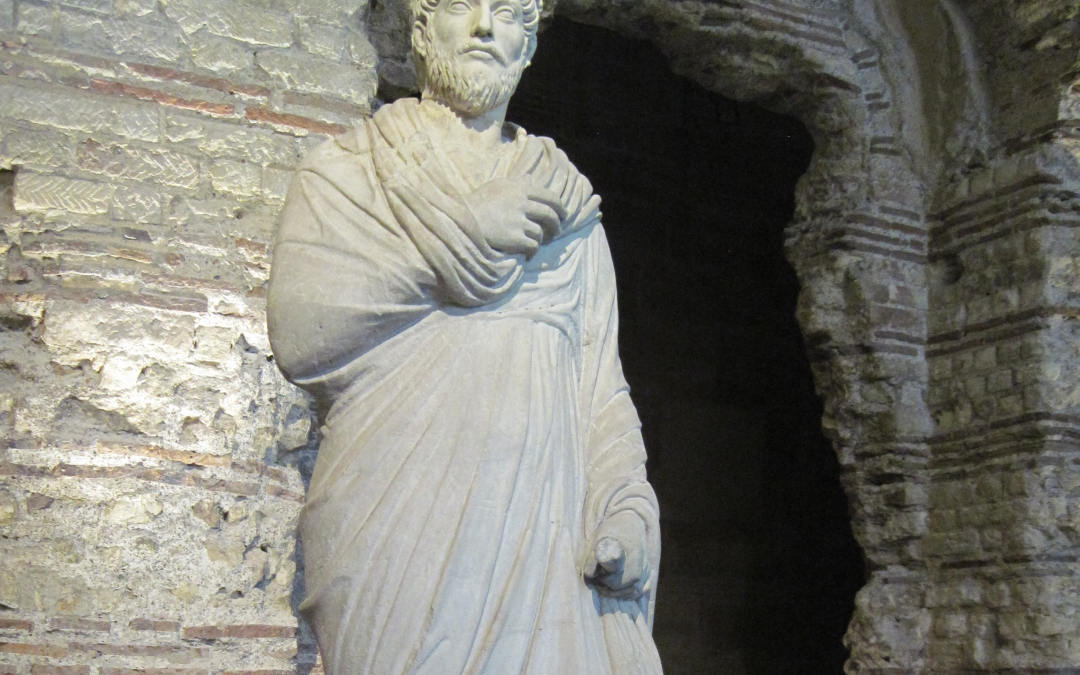 I am a historian – more precisely, a classicist, i.e. a specialist in the Graeco-Roman world – and an Esperanto-speaker. For some twenty-five years I have taught and researched in this field, concentrating on the period of the Emperor Justinian (A.D. 527-565), for the past twenty years at the University of Ottawa, Canada, a bilingual institution, where I give courses in both English and French. There is thus little overlap between my research and my Esperanto activities, but on occasion opportunities arise, as I shall describe below.

The history of Esperanto and various organisations championing it is a field that has existed for some time. That of Esperanto in a wider perspective, e.g. in the history of conflicts and what writers in Esperanto can tell us of the experience of citizens caught up in the wars of the mid-twentieth century, is now being pursued in a much more active and organised way, for example by the team led by Pascal Dubourg Glatigny. Research in such fields can give rise to important studies, such as that of Robert Garvía, Esperanto and Its Rivals: The Struggle for an International Language (Philadelphia, 2015). Another wide-ranging work, of which a second edition appeared recently and which is available in both English and Esperanto, is Ulrich Lins’ detailed study of persecutions of Esperanto in the twentieth century, Dangerous Language / La danĝera lingvo (Basingstoke, 2017/Rotterdam, 2016).

When asked to contribute to a Festschrift (New York, 2018. Eds: Gotoo, Vergara, Kimura) to honour this author, I realised that I needed to find a subject that would somehow connect his work and my own. It was in this context that I produced an article taking up the intriguing hypothesis of Steven Sage, in Ibsen and Hitler (New York, 2006), that almost all aspects of Hitler’s career could be explained through a close study of certain plays of the Norwegian author Henrik Ibsen (1828-1906). I focused on Ibsen’s play Emperor and Galilean, translated into Esperanto in 1920, in order to demonstrate that, contrary to Sage’s arguments, Hitler’s invasion of the Soviet Union bore little resemblance to the Emperor Julian’s invasion of Persia in A.D. 363. While researching this I stumbled across the figure of Marinus van der Lubbe (1909-1934), a Dutch communist who was condemned to death for his role in the burning of the Reichstag in Berlin in February 1933; it emerged that he was certainly interested in Esperanto, if not a speaker himself, although this is little reported. Even from my cursory work it is clear that much remains to be said about Esperanto and its role in significant events of the last century.

Chance conversations can also throw up opportunities. When talking to Susanna Braund of the University of British Columbia some years ago about her project about translations of the Latin poet Virgil I asked her, a little tongue in cheek, what she would say about the Esperanto translations of the Aeneid, his greatest work. In response, she asked me to examine the question. This I did for a chapter in S. Braund and Z. Torlone, eds, Virgil and His Translators (Oxford, 2018), a work that has just been awarded the Alexander G. McKay prize for its contribution to Virgilian studies. As an undergraduate, I had studied the poem, and so my work on the three Esperanto translations gave me the chance to return to a work I knew quite well. As I looked closely at the translations, including one that faithfully reproduced the poem’s hexameters throughout all twelve books, I could perceive the differences between them and their objectives: in the early days of Esperanto, when this first translation appeared, there was a great effort to provide versions in Esperanto of great works of literature, partly to show the versatility of the language, partly also to endow it with its own literary traditions and idioms. Looking at translations of Virgil into other languages, such as Scots, I realised that similar agendas lay behind other translations, as can be seen from a glance at this volume.

My work continues to involve Esperanto intermittently; I hope to publish an Esperanto translation of the Roman historian Procopius’ Persian Wars in the near future, for instance, and have also given lectures on Roman history at the Internacia Kongresa Universitato, most recently during the Virtual Congress of 2020. I would conclude from all this that the role of Esperanto in the wider fields of both history and literature is greater than might at first seem: not only is it worthy of study in itself, for the role it has played in history, but it can be used as a means to approach broader historical questions. What is more, contacts among historians who speak the language are that much easier than they are when one colleague is obliged to have recourse to the other’s mother tongue.

Geoffrey Greatrex is Professor in the Department of Classics and Religious Studies at the University of Ottawa, and a member of the Board of ESF.