From Esperanto to Dothraki: a book review (1) 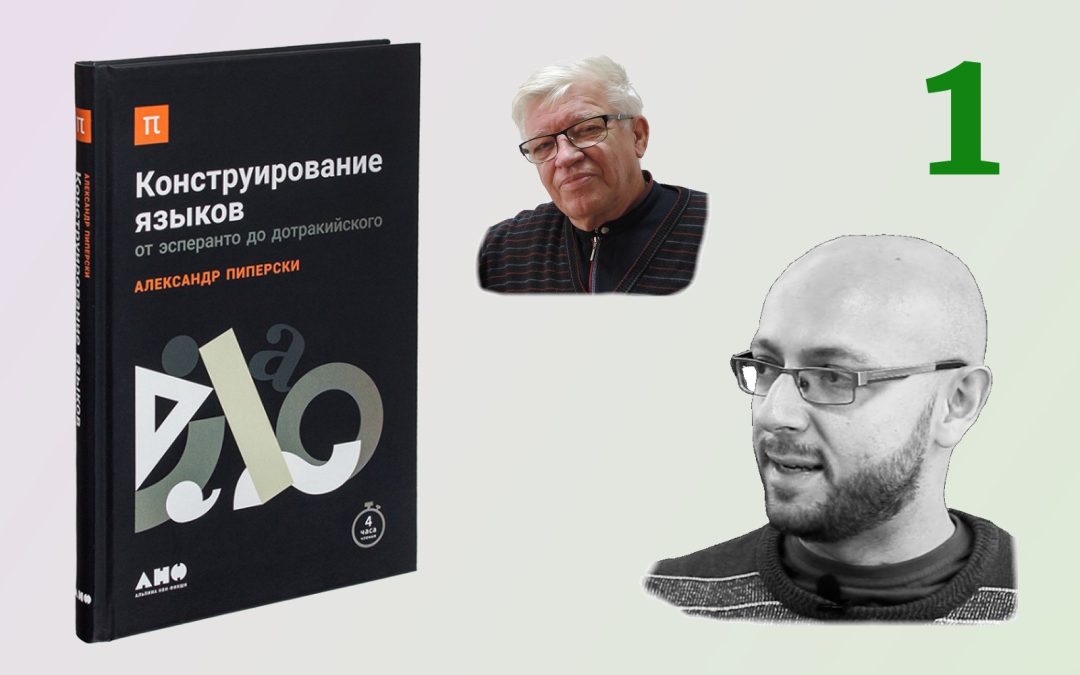 The book is pictured alongside Dr Košecký and Aleksandr Piperski on the right.

In the introduction to this publication, the author endeavours to give a concise presentation of the creation of new languages (their construction) as a new discipline in linguistics, which he terms interlinguistics (considered by us to be in its narrower interpretation). In his text, the author introduces the well known but always relevant fact that the creation of new languages, like any subsequent work concerning them, meets with continual doubts in the world of linguistics, and in the Russian linguistic tradition (just as formerly in the Soviet one) one never gets beyond the description of consciously created languages as “iskustvennije”, i.e. artificial, which current (and also older) European linguistics/interlinguistics has replaced with the label planned (a planned language).

The need for a classification of such languages is, in the author’s view, prompted by the fact that their “world” is very extensive. Its arrangement is determined by two parameters:

To start with the reasons for creating a language, the most popular one is to perfect human thought by means of a new, systematized, logical language. As the author emphasizes, this goal is closely tied to the hypothesis of linguistic relativity or the Sapir–Whorf hypothesis: a language influences the thinking of the people who speak it. If so, is it not vital that we come up with a language to be constructed in a strictly logical manner and contain no shortcomings? The perfection of language, and thereby also of thought, is the guiding idea for the creators of languages we call philosophical or logical. To the ranks of these languages the author adds Loglan from the year 1960.

As we shall continue to see, the construction of languages can have a practical aim – of assisting mutual understanding between people. It is understandable that when one considers the multitude of languages that exist in the world, the role of communication tool is often played by the intermediary language. While in the territory of Russia this is Russian, on the international stage people typically communicate with each other in English. Here the opinion arises that choosing one language to have special status is not fair. This reality has triggered the existence of a further direction for language construction, representing the creation of international auxiliary languages. And here, too, we encounter evolution: in Europe, the Middle Ages, just like the early modern era, were a time of interest in philosophical languages.

An interesting piece of information the author supplies is that under the influence of information technology in the second half of the 20th century, interest in languages of this type has focused on universal pictographic languages. In this connection, even the so-called space languages (intended for communication with inhabitants of other planets) are mentioned, tying in with the deepening of the science-fictionesque nature of the world today. But here the author points out the risk of a possible merger of such languages with those used in programming [which we rightly call artificial – reviewer’s note] or with those that stem from the requirements of artistic (literary) creativity.

We will permit ourselves a brief note that an important distinction is missing in the author’s classification – namely the division of such languages into projects, semi-planned languages and planned languages, which is already normal in today’s interlinguistics literature. That is to say: only with difficulty can one regard as a language a proposal that, metaphorically speaking, has never left its creator’s desk and has remained a mere project. Categorised as semi-planned languages are those that have attained, or in some cases are attaining, a certain level of application in society. They are but a few: Latino Sine Flexione, Occidental-Interlingue, Volapük and notably Interlingua. At the end of this hierarchy are the planned languages, whose sole representative is Esperanto as a fully functioning language with its extensive foundation of speakers and their activity. To keep things simple, we here avoid the term language for individual projects.

The author significantly draws attention to a further parameter in the classification of the results of language-planning work. Languages that adopt their lexical and grammatical material from natural (ethnic) languages are labelled a posteriori; opposite them, those that are created “from nothing” are a priori. Interesting, although slightly provocative, is the author’s note about literary languages based on certain dialects (as an example he offers the modern German literary language). As he stresses, these are nothing other than a posteriori auxiliary languages, just with the difference that they are not intended for communication between various nations, but purely between members of a single nation who speak in various dialects (p. 18).

The book’s relatively extensive introduction ends by pointing out that the volume does not aspire to complexity and that it provides the user with several more detailed sources. This statement entirely tallies with reality, since some publications on the subject present as many as 1000 such projects (e.g. A. D. Duličenko gives 917 of them up to the year 1973), their constant growth is to be expected, and – especially since the arrival of the Internet – the problem of presenting them has become less complicated.

(The six chapters of the book will be explored in detail in subsequent instalments of this review.)