LBR: Growing up with Esperanto – more than just a podcast 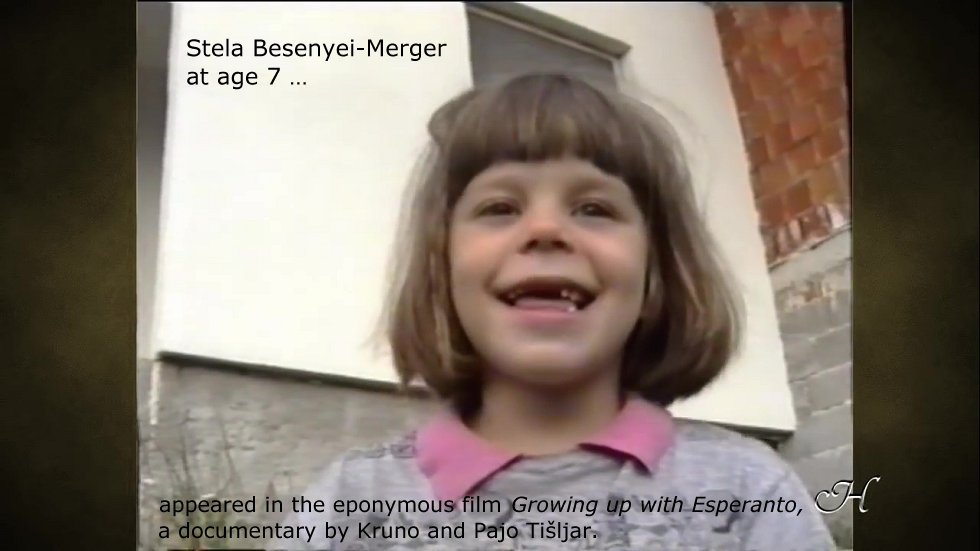 Do you want to raise your children with Esperanto? What kind of people decide to use Esperanto at home and why? What is the experience of native Esperanto speakers whose path was chosen for them? I’ve often been asked these questions, because I am a native Esperanto speaker myself. I am Stela Besenyei-Merger and in 2017 I created a podcast: La Bona Renkontiĝo (The Good Get-Together). My goal was to teach how to organize youth Esperanto events and introduce listeners to activists in the movement. Some of the interviews touched on the native Esperanto experience, and the audience showed enough interest to inspire dedicating more time to the topic.

I decided to apply for an ESF grant with the aim not only of publishing a ten-part series of podcasts, but also of creating an open database of interviews suitable for research. I had in mind not just my own research interests, but the questions that native speakers are typically asked. So I wanted to give a complete overview of the circumstances, decision process, experiences and challenges relating to raising children with Esperanto.

The podcasts allowed me to publish five interviews from 2018, which were recorded during the Esperanto family summer camp in Mühlhausen, Germany. The other five episodes are the result of new research done in the winter of 2020. To make up the promised number of 10 interviews, five more were conducted. Researchers who wish to use the material will also have access to the transcripts made by Raoni Sousa from Brazil. The sound technician for the podcasts was Melono Desnos from France. The ESF contact was Mark Fettes. Technical support was provided by Chuck Mays. The project connected three continents and was conducted online from our homes.

The content of the interviews concentrated mainly on parents’ participation in the Esperanto movement: how they heard about the language, how they learnt it, and finally how it became so important to them that they ended up using it at home with their children, too. The life stories present in detail a variety of choices of method and language. Who spoke which language when to the children? Did the children reply in Esperanto? Did the situation change when the children grew up and moved out of the family home? I was also interested in how other members of the family and people at school reacted to hearing that the children were learning Esperanto at home: how supportive, resistant, difficult or helpful had the environment been? If you’re interested in the different models of these methods, you can hear examples of the “one language, one person” method (this is the most frequently used) and of the situational model, plus there are also examples of children hearing Esperanto at home but not being directly addressed in the language.

The interviewees often mentioned various events and visits, and many comments emphasized that Esperanto was and continues to be the main inspiration behind – and a key experience for – international travel. The questions I asked the native Esperanto speakers were of course a bit different, because the goal was to show the other side of this type of education. We compared notes on how we perceived being a native speaker during childhood and how that influenced our later lives as adults.

One particularly interesting result of the research was learning about Esperanto movements of the past in the interviewees’ countries (such as Croatia, Iran, Canada, Hungary, etc). Additionally, several of them worked internationally for UEA (World Esperanto Association) or TEJO (World Esperanto Youth Association). How did the parents participate in the movement before and after their children were born? They discussed how they could stay active in the movement while raising their children, because in many cases starting a family also meant moving countries, sometimes even travelling between continents, far from family and friends. It’s also worth mentioning here the illuminating stories of how history influenced life and the use of Esperanto at home, such as in the silent period during the Nazi regime in Germany.

The successful first phase produced a wealth of material, despite most interviews coming from experiences of European families. There were two interviews each from North and South America, one from Australia and one from Asia. The ten episodes have been downloaded more than 4000 times from 58 countries. The majority of listeners are in the United States, France, Germany, Brazil and Spain.

The hope is to continue the research; ideas abound. Obviously the goal is to add more interviews from insufficiently represented parts of the world, and there must be native speakers in Africa as well! Translation of the interviews into English would allow access by those researchers who do not speak Esperanto (yet). They could learn more about the Esperanto-movement through these unique life stories. These interviews could also be interesting for those who simply want to know more about multilingual families. The third idea is to create a website to collect more material about Esperanto in the family setting generally. Further ideas are welcome!

If you haven’t yet heard the episodes, you’ll find them here – mind you, they are in Esperanto. And if you would like to learn more about the project, you can find a detailed presentation on YouTube. Happy listening!

Stela Besenyei-Merger is a Hungarian-French native speaker of Esperanto, trained in the use of art for social education. She studied at Amsterdam University College, in the Department of Liberal Arts and Sciences, specializing in sociology and political sciences. She is experienced in social research and in authoring various educational materials.
Ĉi tiu artikolo estas ankaŭ disponebla en Esperanto.