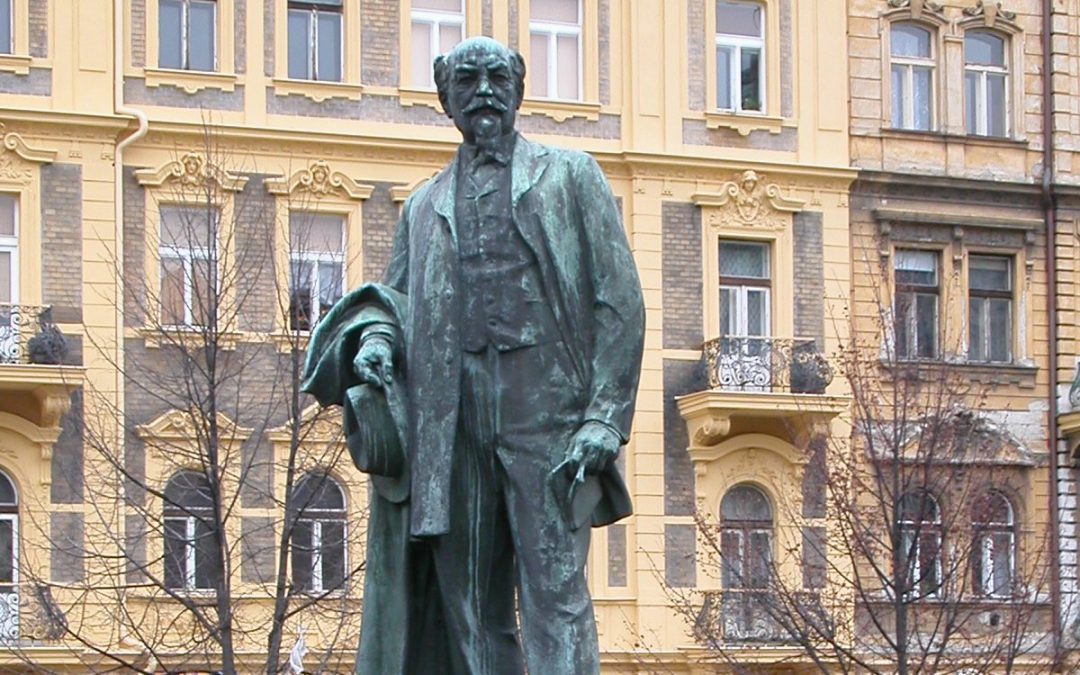 Pardubice. Kutná Hora. Svitavy. Jevíčko. Hradec Králové. Smíchov. Have you ever heard of any of these places? Worry not, me neither – at least not until recently. Let us start with and in Smíchov.

In 2020, the ESF generously funded my project “Local Internationalist? Bohemia and Central European Esperantists between the local, national and global (1880s-1920)”. In late August that year, I arrived with my son (then 15) in Prague, that is in Prague 5 or Smíchov. Househunting from Scotland had been a challenge, but we found a nice apartment in Smíchov. The district is proper Prague, away from the more scenic touristy city centre and Old Town. Today, Smíchov is slowly gentrifying, yet is visibly a former working-class district. For us it was conveniently located. My son was able to hop on the subway to his German-Czech school, where he was immediately surrounded by a myriad of languages including Czech, German, English, Russian and Bulgarian. This was quite the contrast to his local Scottish and (by and large) monolingual high school, and he was deeply impressed by the fact that some of his soon-to-be friends easily handled several languages.

Smíchov was convenient for me as well. Either directly onto the bus that took me to the outskirts of Prague to the National Archives and the City Archives, or straight to the city centre to the National Library or to the Museum and Archive of Czech Literature. We both settled in well until covid became the main news again by September. With the news of a strict lockdown looming, my trips to archives became slightly more hectic and pragmatic: going through files fast and taking pictures as quickly as I could – grab-and-run archive visits.

Then the hard lockdown came in early October. “Hard” may mean different things in different places. Czechs have their own way with rules and authorities. My Czech friends say that this goes all the way back to the experience of empire and communism: the joy – or necessity – of dodging rules and budging laws that came from far-away Vienna or not so far-away communists. Yet “hard” meant archives were closed. But I had taken my photos and started sifting through them. In between, I took breaks and walked Smíchov. On one of my afternoon walks I came across the statue of Jakub Arbes. The name rang a distant bell. 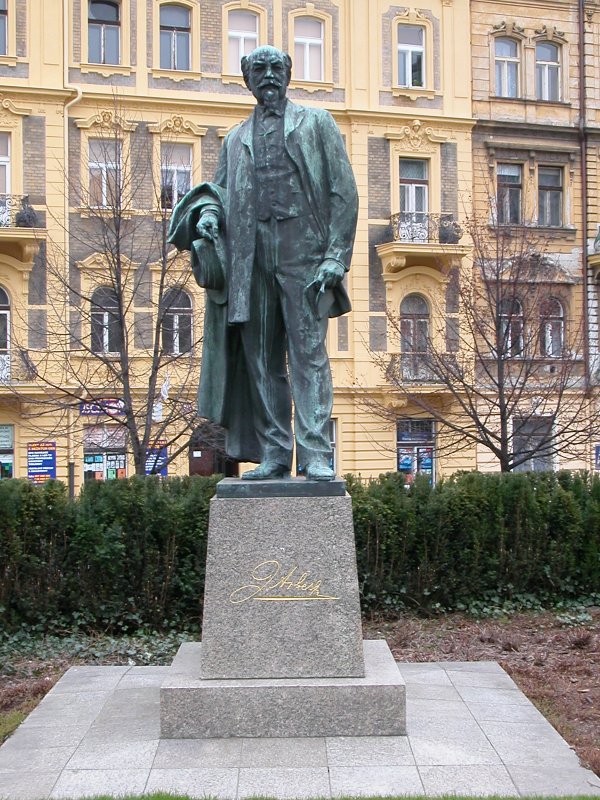 But what had brought me to (Esperanto in) Prague and Bohemia in the first place? Well, the places mentioned above. My own entry-points into the history of Esperanto were the annual congresses, starting with Boulogne-sur-Mer in 1905, up to the Paris congress in 1914. From an attempt to get a grasp of the geographical distribution of congress attendees, some – to me surprising – regional clusters emerged. Among them: Bohemia, and with it, questions.

Why would people in places like Holice, Pardubice or Jevíčko learn Esperanto in 1905? These were not quite the places where I expected the early Esperanto movement to flourish. After all, these were all more provincial cities dotted around Prague. And who were these people around 1910?

Returning from my lockdown stroll and the Jakub Arbes statue, I went back to my files. And there they were: five letters sent to Jakub Arbes between spring and autumn 1908. The author was Josef Grňa (1880-1918), one of the many names in my database of Czech Esperantists. Thus far I know little about Grňa himself, other than that he was a teacher in the town of Jevíčko, from where he wrote to Arbes. If you look up Jevíčko on Google Maps you will find a small town, nice but unassuming, in the Bohemian backwoods. Yet when I map Jevíčko onto my data, it appears in the heartland of an (unlikely) Esperanto hotspot in the early years of the twentieth century.

Jevíčko is situated just north of Brno, which hosted the the first Esperanto club in Bohemia in 1901. Just northwest of Jevíčko we find other early clubs in places like Pardubice and Kutná Hora. These are the hometowns of several of the pioneers and early activists of the Bohemian movement, such as Theodor Čejka or Stanislav Schulhof. Many of these early Bohemian Esperantists were teachers at local high schools. And while a place like Jevíčko at first sight seems to be a remote hinterland, it was not. From the letters Grňa sent to Arbes, it becomes evident that all these Esperantists were well connected, in constant communication, and on to something.

In 1908 when Grňa approached Arbes, a certain Franz Kafka was just about to start his literary career in Prague. While less known than Kafka internationally, Jakub Arbes was no stranger in Czech literature. In fact, he was a household name who had come to fame in the 1860s and 1880s. Josef Grňa approached Arbes in April 1908 with the suggestion to translate some of his “literary gems” into Esperanto: 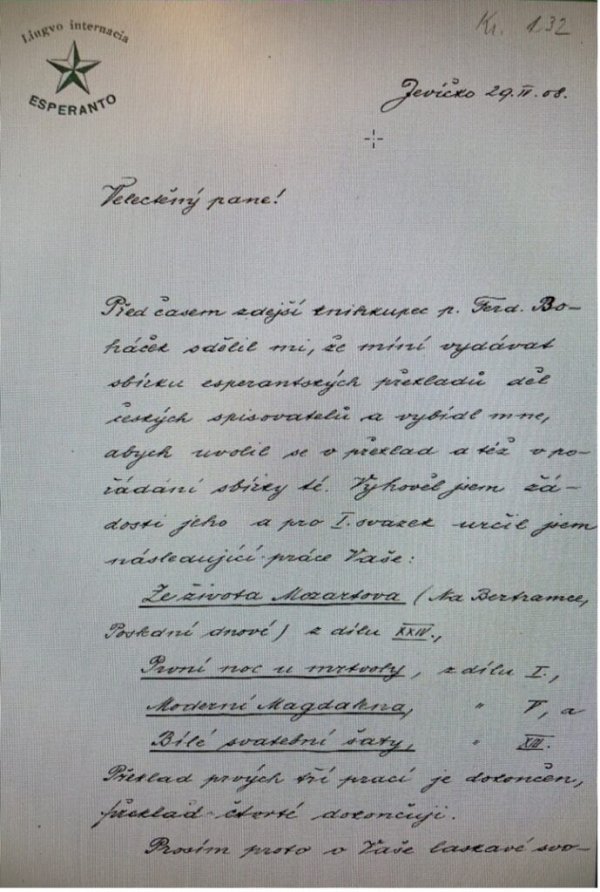 Grňa had discussed this move with fellow teachers and Esperantists as well as with a local bookseller and publisher from Jevíčko, Ferdinand Boháček – another local Esperantist. And so, in 1910, some of Arbes’ Czech literary works including “Moderni Magdalena” (The Modern Magdalena) and “Ze zivota Mozartova” (From the Life of Mozart) were published with Hachette in Paris under the title Rakontoj (Stories). It was the first translation of Czech literature into Esperanto.

What is remarkable about this? And what does this tell us about Esperanto in Bohemia around 1910?

Of course, a statue, some letters, browsing through Bohemian Esperanto journals, and some local Esperantists cannot tell the full story of the language in Bohemia at the time. But these snippets are part of a bigger picture and pattern. High-school teachers stand out as part of the wider socio-professional profile among Esperantists in the region. And if we accept that education is closely linked to the idea of the nation and is a tool for nation-building, these Esperanto-speaking teachers were on to something. They saw Esperanto as a means to showcase Czech literature to the wider world. Esperanto, for them, was the means to popularise the literary works of a “small nation” in a much larger and rapidly interconnecting and globalising world around 1910.

Today, an author like Jakub Arbes may not resonate with readers beyond the Czech Republic. Yet back then, his novels stood for Czech culture, literature and nationalism. Arbes’ works were among the first to be translated. And it may have been a very deliberate choice. He was a journalist and editor of several political journals including Hlas (The Voice). His writing, and his political activism which included close contacts to the so-called Májovci – a post-1848 literary circle that opposed Viennese-Habsburg rule – led to persecution, a 15-month prison sentence and, ultimately as a consequence, time in French exile.

While we may associate Esperanto with internationalism, scientific collaboration and the peace movement (to name just a few), the Arbes–Grňa correspondence hints at another facet that may be particular to Bohemia, or to other small nations or areas defined by tensions between state and region, in this case between Czech and the dominant language of the empire (German). My research is still work in progress, yet local actors like Josef Grňa may have been both internationalists and nationalists.

Bernhard Struck works at the Institute for Transnational History in the School of History at the University of St Andrews in Scotland, researching modern European history and the Esperanto movement in the early 20th century.
Ĉi tiu artikolo estas ankaŭ disponebla en Esperanto.