A community rallies around its language 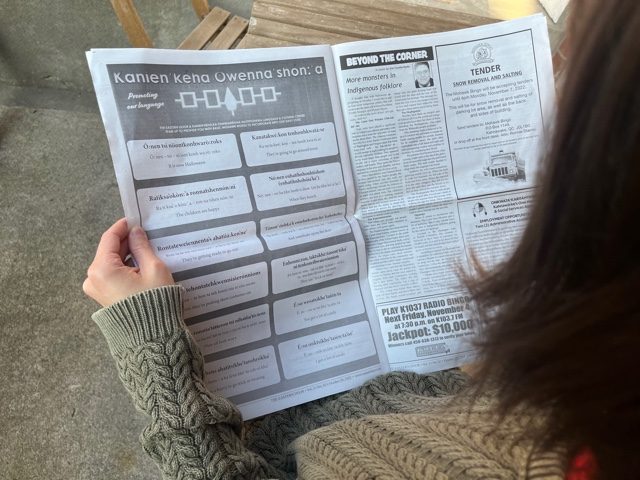 It’s no secret that many Indigenous languages around Turtle Island [= North America] have been threatened by colonialism, and Kanien’kéha – more widely known as the Mohawk language – is no exception.

Only a few generations ago, many Kahnawa’kehró:non – the Kanien’kehá:ka (Mohawk) people of Kahnawake – spoke Kanien’kéha as a first language. However, now most Kahnawa’kehró:non are fluent only in English – or, occasionally, the French that dominates the Quebec communities that surround Kahnawake.

How did this happen? Many community elders, whose older relatives were first-language speakers, have similar stories. In many cases, they or their relatives were forced to attend residential or Indian day schools where their culture was systematically stolen from them – where speaking Kanien’kéha was met not with encouragement but with punishment.

Nowadays, things are different. Passionate community members in Kahnawake are working independently or through community organizations to revive and revitalize Kanien’kéha, an endangered language that now has fewer than 3,500 fluent speakers worldwide.

Kahnawake is home to its own Kanien’kéha children’s show inspired by Sesame Street – Tóta tánon Ohkwá:ri – that helps make learning the language fun. Multiple schools offer Kanien’kéha immersion for at least some grades.

At the Iakwahwatsiratátie Language Nest, mothers and their children learn Kanien’kéha together in an immersive environment. This encourages whole families to learn and use the language.

The Kanien’kehá:ka Onkwawén:na Raotitióhkwa Language and Cultural Center offers a range of language initiatives, including the Ratiwennahní:rats adult immersion program, where some Kahnawa’kehró:non dedicate two years of their lives to learning the language full time.

But, of course, not everyone has the opportunity to do that. Most do what they can, though. Words like niá:wen (thank you) and kwe (hi) are ubiquitous. Many people opt to identify themselves and their children by Kanien’kéha names.

The Eastern Door newspaper is also working to do its part.

“We’re trying to pass down as much Kanien’kéha to our son and daughter as possible, so for me, it’s a personal issue, a personal journey, a personal fight for the language,” said Steve Bonspiel, editor/publisher of The Eastern Door.

Bonspiel, an above-beginner speaker, has made it a priority to use the community newspaper to contribute to the community’s effort to ensure future generations of Kahnawa’kehró:non grow up as first-language speakers. “It’s only a small part that we’re doing, but I always think of the longer-term effects and how that’s going to reach people later on.”

A recently introduced “Sharing Our Stories” page focuses on relating the stories of community elders while giving Kahnawa’kehró:non a chance to read Kanien’kéha alongside English versions to see the language in context.

A separate page dedicated to boosting vocabulary, informally known as the Mohawk words page, has been a staple in The Eastern Door for longer, dating back to 2020. It continues to be a crucial aspect of the newspaper’s efforts to support the language.

It is used by community members such as Victoria Ann McComber, who cuts the words out of the newspaper and tapes them up around her house in an effort to integrate them into her daily life.

“My great grandfather used to only speak Mohawk, so we picked up small everyday words also from my grandparents,” McComber said. “My mom and dad were fluent, so it was spoken all the time. We learned what we could, not all that fluently, but enough to get by. Then we hit high school – and no talking that language.”

Her husband and son can speak, so she applies the words she is learning. “Sometimes I get it wrong and it totally means something else and we laugh,” she said.

Kanien’kéha is a huge social, educational, and political priority in Kahnawake, one virtually everyone shares. Amid struggles against continued incursion on the language from external governments, Kahnawa’kehró:non are united by a desire to revitalize a language that helps shape the identity of Kanien’kehá:ka.