Sandokan, the Tiger of Mompracem 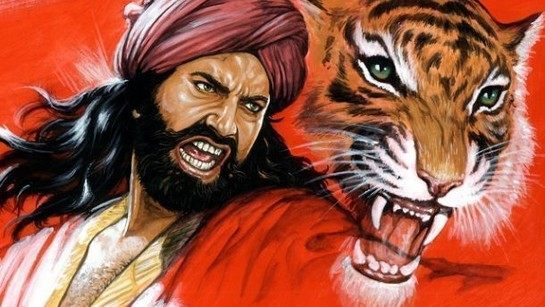 This article by Alessandra Madella, which originally appeared on the Ĉina Radio Internacia website in January 2022, is republished here with the kind permission of its author.

The Chinese year of the tiger gives us a chance to remember the tigerlike character of an adventure hero beloved of Italians and many others around the world, that is to say Sandokan, the handsome long-haired brave magnanimous pirate protagonist of a series of Indian-Malaysian adventure novels from the pen of Emilio Salgari (1862-1911). This Italian author actually called his hero the “Tiger of Malaysia” or “Tiger of Mompracem” after the name of a part-real and part-fantasy island in the Malay archipelago. It is the unconquerable refuge of Sandokan and his pirates, the intrepid multi-ethnic “Tigers”, who are prepared to follow their young leader anywhere. For them the greatest honour is to use their bodies to shield him, even when this means their own death, during the fiercest battles.

Three tiger heads with their mouths open adorn Sandokan’s red flag and instil fear into his enemies. Being a tiger, he does not hesitate to launch a solo attack on groups of armed men, but he is equally capable of self-restraint, staying hidden in the shadows when there is no chance of victory. Like a wild animal, he is strong, slim and close to nature, which he knows so well. Even when wounded and feverish, he is able to save himself in the jungle and survive on its fruits. He has a thirst for blood, but his vengeance is directed purely at the English, Dutch and Spanish colonists who seized his kingdom and killed his mother, brother and sisters. In contrast he gives handfuls of diamonds to Chinese sailors who honourably defend themselves against his attacks. And he protects local people from violence and exploitation if they gratefully help him and his men. 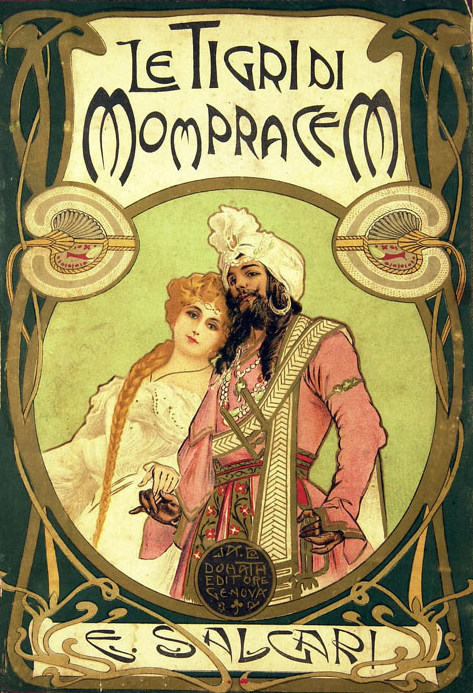 Sandokan’s only weak point is his romantic heart. Almost like a hero from Italian opera, he inevitably and unwillingly falls in love with the niece of a British enemy, despite knowing that this love will imperil all his dreams and beliefs. In fact the sixteen-year-old belle Marianna is only part-British, having been born under the volcano and azure sky of Naples in southern Italy, where her mother came from. From her youngest days, her officer uncle told her about the discomforts of the lives of soldiers and sailors. Yet she taught herself the fine womanly arts and was thus known to all as the “Pearl of Labuan”. Sandokan, 10 years older than her, was already attracted by her fame before he saw her. But he is utterly captivated when she tends his wounds and fearlessly reciprocates his love. He doesn’t hesitate to fight a tiger with just his kris (dagger) in order to impress her. And he does his utmost to carry her off to Mompracem, even though he’s aware this could mean the end of his career as a pirate and make his revenge entirely impossible. 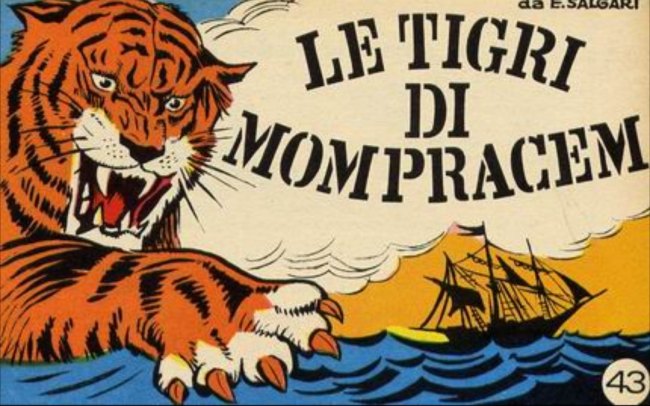 Sandokan captured the imagination of Italian children from his first appearance in 1883 on the pages of a newspaper in the northern Italian town of Verona, where Salgari was born and worked as a chronicler. The first book in the series was published in 1900 with the title “The Tigers of Mompracem” (Italian: “Le Tigri di Mompracem”). Roughly a dozen successful adventure novels followed on from the same author, then there were more by his son Omar and others after the Second World War.

In 1976 the Italian director Sergio Sollima created a mini-series about Sandokan, which is still to this day the most watched programme in Italian TV history and was also a huge success abroad. The main role was played by Indian Sikh actor Kabir Bedi, who became very famous in Italy and even learned to speak Italian.

In 2010 Paco Ignacio Taibo II, a Mexican author of Spanish descent, took up Salgari’s tale and heroes again in his book “The Return of the Tigers of Malaysia” (Spanish: “El retorno de los tigres de la Malasia”). For this prolific author, who among other things has written a biography of Ernesto Che Guevara and an essay on the history of communism in Mexico, Sandokan has always represented the most passionate and enthusiastic form of anti-imperialism, and the now elderly pirates can still battle effectively for that cause.

Salgari lived in the same era as other European writers about Asian lands, such as Joseph Conrad (1857-1924), who travelled as a sailor to Borneo and Malaysia, or Rudyard Kipling (1865-1936), who was born in India and lived there for a long time. But the Italian author, who had to abandon his studies to become a captain for voyages across the sea, never went further than Brindisi, a port in southern Italy. He found inspiration in exotic fashions, but mostly he conducted solitary research in libraries and museums like the Natural History Museum in Turin. This northern Italian city, which will host the Esperanto World Congress in 2023, was actually where he spent the last years of his life, alongside his family and a small group of other impoverished artists who liked to drink and joke, popularly known as “Bohemia”.

In our present pandemic times, people have had to grow used to mere dreams of the distant travels that world health conditions often make impossible or impracticably difficult. Maybe this is why the unstoppable imagination of a writer like Salgari has again become so popular. A new edition of the Sandokan novels has been on sale at Italian newspaper stands since summer 2021. And in February 2022, Italian TV started presenting a modern continuation of the famous series, with Turkish actor Can Yaman in the leading role and with more attention paid to the woman’s point of view in the depiction of this romantic relationship between Europe and Asia. Hopefully the Tiger of Malaysia’s strength will help us safely see the end of the coronavirus pandemic in the Chinese year of the tiger and imagine a fairer world for a more positively interconnected future.