Numismatics: an Esperanto cultural treasure trove no longer in the dark (2) 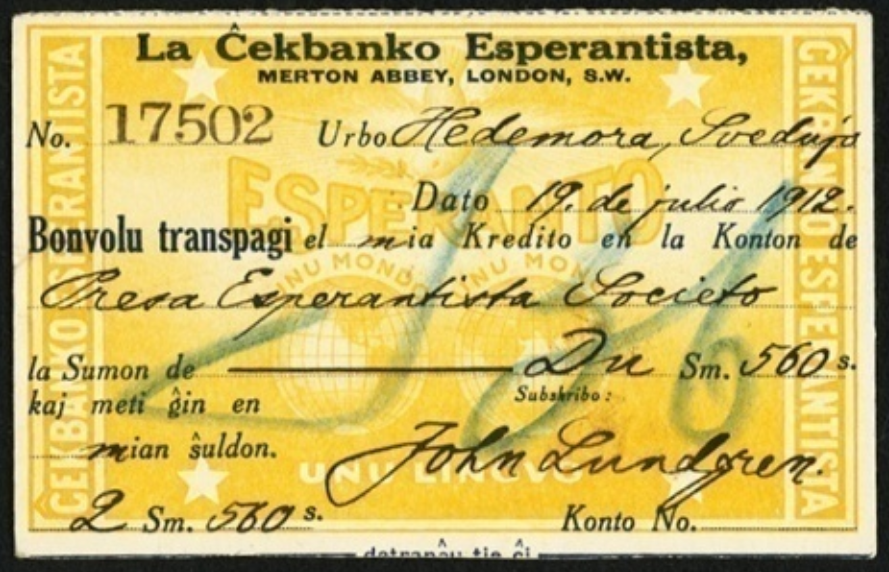 In his groundbreaking booklet Esperanto-mono (“Esperanto Money”, 2000) Hans Jankowski includes not only Esperanto coins and medallions, but also payment methods and securities of various kinds that have been used as local or event-related means of payment. When mentioning Esperanto money, it’s crucially important to stress that it’s not an official currency. Only a few national coins, put into circulation by official state authorities in honour of this or that person’s Esperanto (or other) merits, serve as official currency in the relevant country.

In 1907, only twenty years after the first book in the language was published, Esperanto pioneers felt the need to launch an international system of currency in the Esperanto world. The aim of these attempts was to simplify relations of trading and exchange between Esperantists in different countries and to convince businesspeople around the world of the advantages of a common international auxiliary language and a worldwide currency system. The International Commercial and Economic Specialist Group (IKEF), founded in 1985, to this day promotes Esperanto through its practical uses in economics and commerce.

The first project was started by Prof. René de Saussure, who was actually only hoping for an imaginary international unit of currency that would enable convenient conversions between national currencies. Although from his point of view coins and banknotes were not really required, on Esperanto’s 25th anniversary in 1912, the first (so-called “fantasy”) coins of 1,000 and 2,000 “spesoj” were released. In 1907, when there were still no such coins in existence, the German Esperantists Herbert F. Höveler considered putting the speso system into practice in the banking service. In 1908 he founded the Esperantist Cheque Bank. Various means of transferring money were made available, with the speso as the currency.

The bank was an immediate success and worked in collaboration with other banks such as London & South-Western Bank, Ltd in Merton Abbey, UK; Bankhaus Gebrüder Arnold in Dresden, Germany; and the bank A. Saĥarov, Tverskaja in Moscow, Russia. Esperanto associations in various countries, many publishers and sellers of Esperanto books, the Chamber of Commerce in Washington, USA and also London’s famous Thomas Cook & Son had accounts at the Esperanto bank.

Then, like a bolt of lightning, came the atrocious slaughter of the so-called Great War, which not only caused the cancellation of the tenth World Esperanto Congress in Paris but also divided the peoples of Europe and their Esperantists, and consequently stifled the Cheque Bank’s activity. Höveler passed away (1918) and his project was liquidated…

In 1946 (!) world federalists in The Hague, Netherlands, at the initiative of Julia Insbrucker and Andre Cseh among others, founded the Universal League (UL). They wanted to regenerate the movement and the Esperanto world currency, with the motto “one world – one language – one currency”. A real method of payment was created, a form of voucher (a type of unofficial banknote).

Members of the League also planned to immediately put metal coins into circulation. In 1960, the Dutch State Mint in The Hague minted the first “stelo” coins of 1, 5 and 10 stelos – showing 1959 as the year!

In 1965 there followed coins with a value of 25 steloj in gold, silver and cupronickel respectively.

Ongoing inflation in Europe and the continued reduction of purchasing power meant that the UL’s membership dwindled, the league became dormant and the stelo system quietly vanished away. Nowadays Universal League’s legacy is managed by the International Esperanto Institute in The Hague.

(To be continued in a third article.)

Bert Boon is a Belgian Esperantist, founder of the Esperanto Numismatic Association, UEA’s first specialist group on numismatics, and editor of its journal Esperanta Numismatiko. The journal and membership of the association are free.
Ĉi tiu artikolo estas ankaŭ disponebla en Esperanto.